If you were one of the few who recognized the NFT bubble in the last year, that’s admirable. You did something most people couldn’t – did a good analysis of the long-term macro trends in the cryptocurrency market and summarized them. Because this isn’t the first time we’ve ventured into the unknown and ended up disappointed. Does anyone remember the ICO bubble of 2017-2018?

This is not the first time we have experienced boom and bust cycles in the crypto market. Looking back at the ICO bubble of 2017-2018, everyone praised this new fundraising tool as superior to a boring IPO with fiat currency. Now, five years later, we realize that the hype has paid a heavy price.

Similar to what happened with NFTs in 2021, the ICO bubble was inflated by market peaks and a seemingly never-ending influx of new investment, driving up prices.

Meanwhile, unprecedented macro trends pushed Bitcoin prices to $18,000 and ETH prices to $1,100. The expansionary monetary policies of the two largest economies in the United States and Europe with near-zero interest rates have paved the way for high-risk investments, especially cryptocurrencies and NFTs. 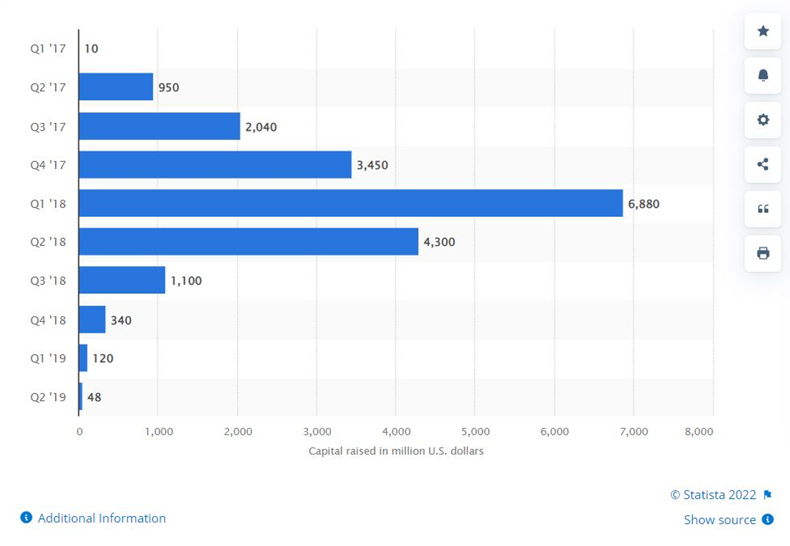 The graph above shows the total amount of funds raised through ICOs globally from 2017 to 2019. After the bubble burst in the first quarter of 2018, the funds received by the project continued to increase significantly until the second quarter of 2018, when VC (venture capital) finally realized that the train had passed.

In December 2018, prices began to slowly decline, and we cannot attribute this decline to specific external factors. There is no central bank raising interest rates, no Putin declaring war on Ukraine, and no COVID-19 causing excessive money printing.

This can only be blamed on the cryptocurrency market cycle which lasts about 4 years and has so far resulted in higher peaks each time it has peaked. But every party ends. After a series of days of frenetic climbs, prices quickly plummeted. Now is the time for the bulls to give way to the bears.

We’ve come a long way since ICOs: NFTs, DAOs, DeFi, and stablecoins are just a few of the innovations.

After DeFi peaked in the summer of 2020, NFTs are the next big thing, starting with Beeple’s Everyday sale. This NFT, auctioned by Christie’s, was sold for a record $69 million, sparking a global frenzy.

The chart below best describes what happened over the next few months: Weekly NFT sales in dollar terms dropped precipitously from a peak of $6 billion to around $100 million. 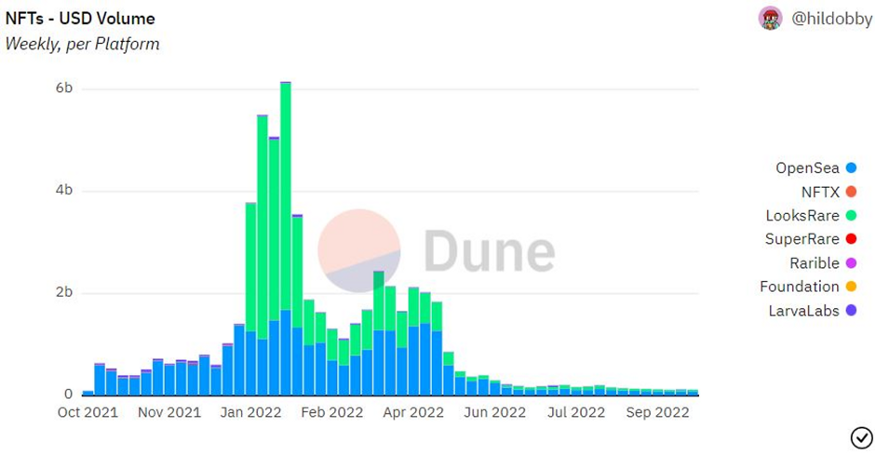 Likewise, a downturn in the market has led to lower prices and lower sales of NFT collectibles. Similar to the ICO bubble, peak sales (VC capital to ICOs) occurred after market capitalization had reached its peak in previous months.

In this example, the cryptocurrency market cap peaks in November 2021, and NFT sales are correspondingly higher in January-April 2022.

This time it happened rather quickly: unlike in 2017-2018, there was no Lunar New Year or some other good reason to justify the rapid decline in the cryptocurrency market, but companies using too much capital and leverage.

After cryptocurrency lender Celsius filed for Chapter 9 bankruptcy protection, the entire space seemed to be reeling and trying to find a solution to what was to come. As prices fell, blockbuster mortgage lenders were pushed to the brink of liquidation. Three Arrows Capital, Nuri, and Voyager are prime examples.

Can NFT survive the bear market?

As with every bull market, not only is their new capital pouring into the market but there is also an abundance of talent (especially developers) looking for work. Regardless of market conditions, these employees and projects will progress and reach milestones. As soon as the bulls turn back, they will immediately push up the market value.

This happens with both ICOs and NFTs. ICP, Polygon, and Solana are just a few examples of successful ICO funding during the bear market.

The fundamental difference when comparing NFTs to each instrument is the macro trends and underlying data.

Just before the Federal Reserve (Fed) hikes interest rates in November 2021, there are rumors that the crypto market will crash and NFT will cool down.

As a result, all markets stumbled, whether it was the S&P 500, Nasdaq, or commodities like gold. The world hasn’t seen such a massive rate hike since the 2008 financial crisis, and since the cryptocurrency has a 0.6 correlation with Nasdaq, a sharp price drop is inevitable.

Investors realign their investments into less risky assets and decide to move their money out of cryptocurrencies. In addition, the Russian leader’s decision to attack Ukraine set off a cascade of reactions around the world, including a spike in electricity and gas prices, leaving investors questioning returns. – The best exposure for the asset class.

Once the banks start cutting rates or the war in Ukraine ends and the cryptocurrency market cycle starts to turn up, the bulls will have the upper hand.

Furthermore, technology is evolving rapidly. With 3 different NFT standards, ERC-721, ERC-1155, and ERC-4907, this technology offers us many uses.

On the one hand, companies are working on finding creative solutions to real-world problems and trying to educate and attract new users. Artists, on the other hand, get the tools to engage with the community and end up getting what’s theirs — essentially higher gross profits on sales. And that’s just the beginning!

As an area of ​​growing utility, NFTs can be used to tokenize assets and provide players with stylish and even industry-leading in-game wearables (such as avatars) to sell tickets and events.

Companies such as Telegram, Twitter, Meta, Starbucks, Nike, Adidas, and LG have integrated NFT technology into products for users.

Bear markets often present investors with a great opportunity to pick up some cheap assets. For example, the reserve price of the Bored Ape Yacht Club has almost halved compared to May 2022. 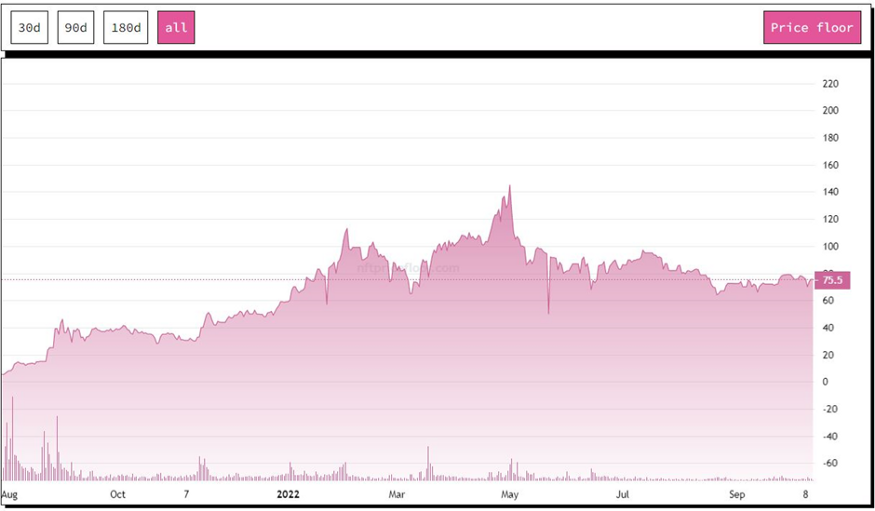 With many other successful collectibles also 50% off, now might be the time to invest in NFTs. Ultimately, investors will be rewarded in the next bull market cycle, whether in 2023, 2024, or later. This is exactly the case with the motto: “Invest in a bear market, profit in a bull market”.