Transaction history recorded on Etherscan shows that the address received 5,000 ETH in two payments from the same address before sending 3,000 ETH to the DeFi protocol. Uniswap, an automated market maker, currently has nearly $3.6 billion in ETH locked in various dApps and DeFi protocols, according to DeFi Llama.

According to Etherscan data, three transactions worth 1,000 ETH were sent from the 52b0 wallet to Uniswap and then converted into various stablecoins.

He confirmed it wasn’t his address so it was fake news. https://t.co/OhN3h6KLwk

The statement sparked debate among other blockchain watchers. Suspicious here is that this wallet is from a former Buterin “doxx’d address” and another on Etherscan using a doxx’d address “vb2“.

“The assertion about Vitalik’s address confuses me,” Van Ness replied. “Either I’m lying or Vitalik is lying. If I’m lying, Vitalik can easily disprove it with a tweet. I will lose my reputation. If Vitalik is lying, it will be the stupidest thing in the world.”

On November 14, 2022, data from Santiment showed an increase in active ETH deposits, while the number of daily active users on Ethereum decreased, suggesting that rumors of a lack of trust in the crypto space have caused traders and investors to retreat.

In May, Buterin withdrew 30,000 ETH from his wallet, fueling speculation of a bearish reversal for ETH, which is currently trading at $2,086. It turned out that he put the money in a wallet to donate to charity.

Shortly after ETH hit an all-time high of $4,891 on November 16, 2021, the Ethereum Foundation sold 20,000 ETH to Kraken. They also sold 35,000 ETH to Kraken five months ago at a similar high. Prominent trader Edward Morra pointed this out, asking rhetorically if the Ethereum Foundation knew something that others didn’t, as the price of ETH dropped 40% in less than two months.

While Bitcoin fell below $16,000 as the FTX failure rocked cryptocurrencies, Ethereum created a support zone at $1,000-$1,200 after falling to $1,073. It’s hard to tell if ETH has bottomed out. Last bottom at $880 on June 18, 2022. There are many uncertainties in the centralized trading industry at present, and many of them are scrambling to prove their credibility. About the failure of FTX.

The collapse of FTX would be particularly damaging to the crypto market, Buterin said, as FTX sought to create a label of a trusted entity. While the demise of the Terra stablecoin has taken a toll on the crypto industry, Terraform Labs hasn’t gone out of its way to being more transparent. So its failure, while catastrophic, was not entirely unexpected.

On-chain data from Glassnode shows that Bitcoin set a new record for the largest net drop in total BTC balances on exchanges, dropping 72,900 BTC in a week.

Similar movements occurred in April 2020, November 2020, and June 2022, with the current outflow leaving the exchange with around 2.25 million BTC. 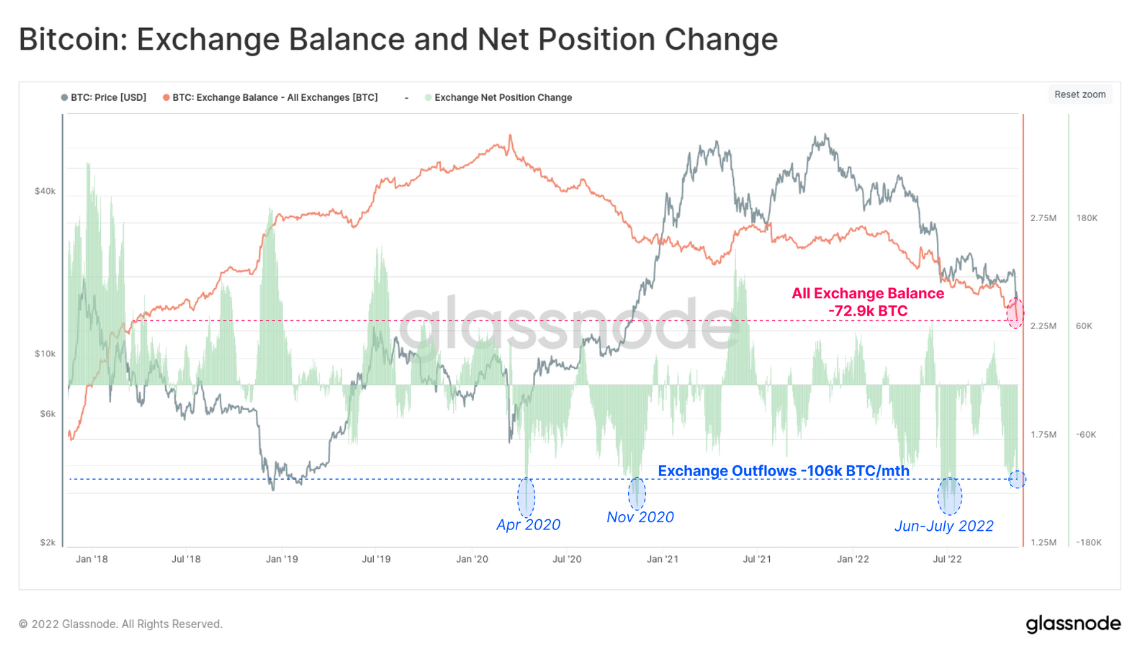 ETH leaves the market in large numbers, stablecoins do the opposite

While ETH did not record an all-time exchange outflow, 1.1 million ETH was withdrawn from exchanges in the past week. According to data from Glassnode, this marks the largest 30-day drop in exchange balances since September 2020, the same year as DeFi Summer. 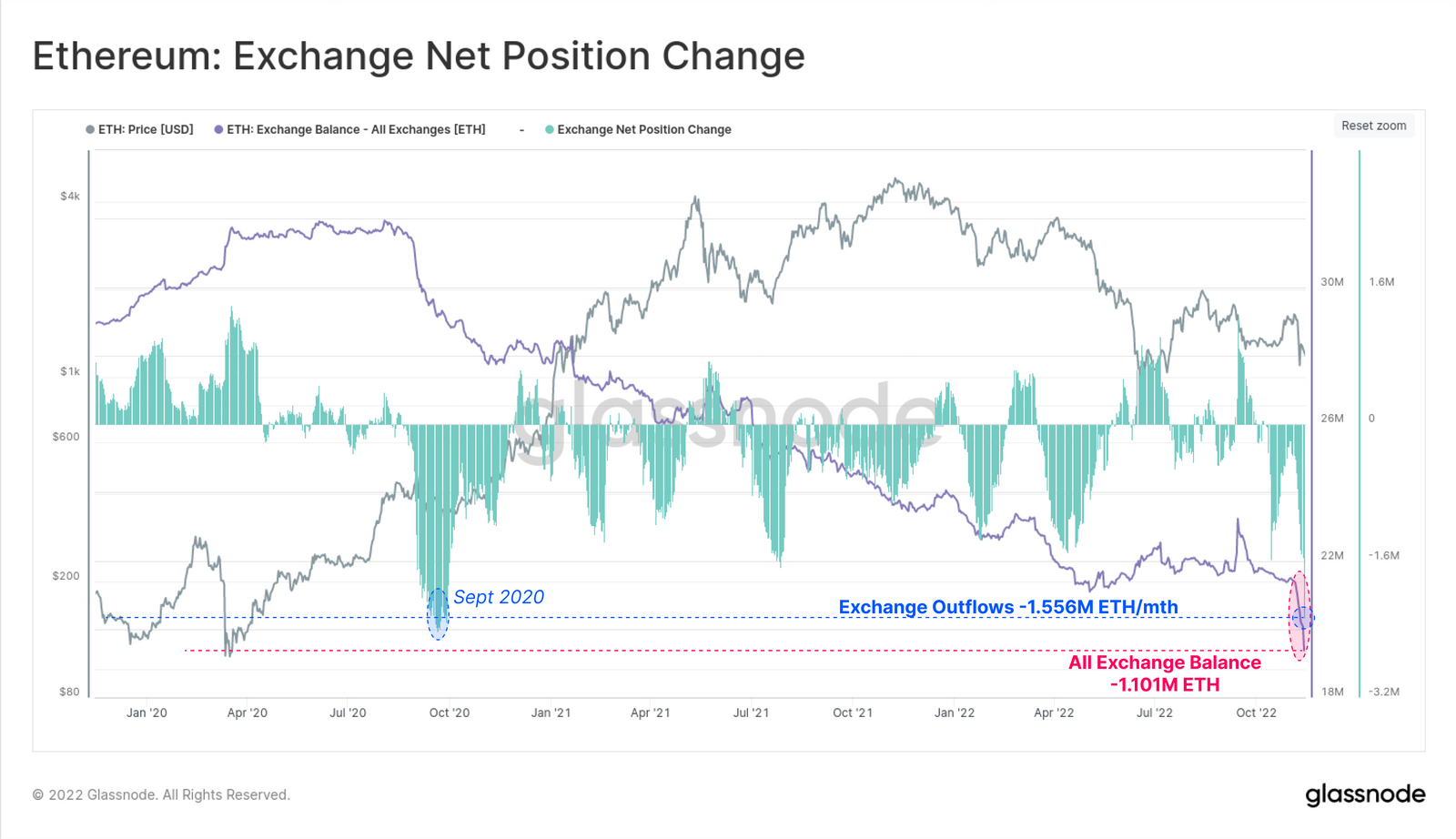 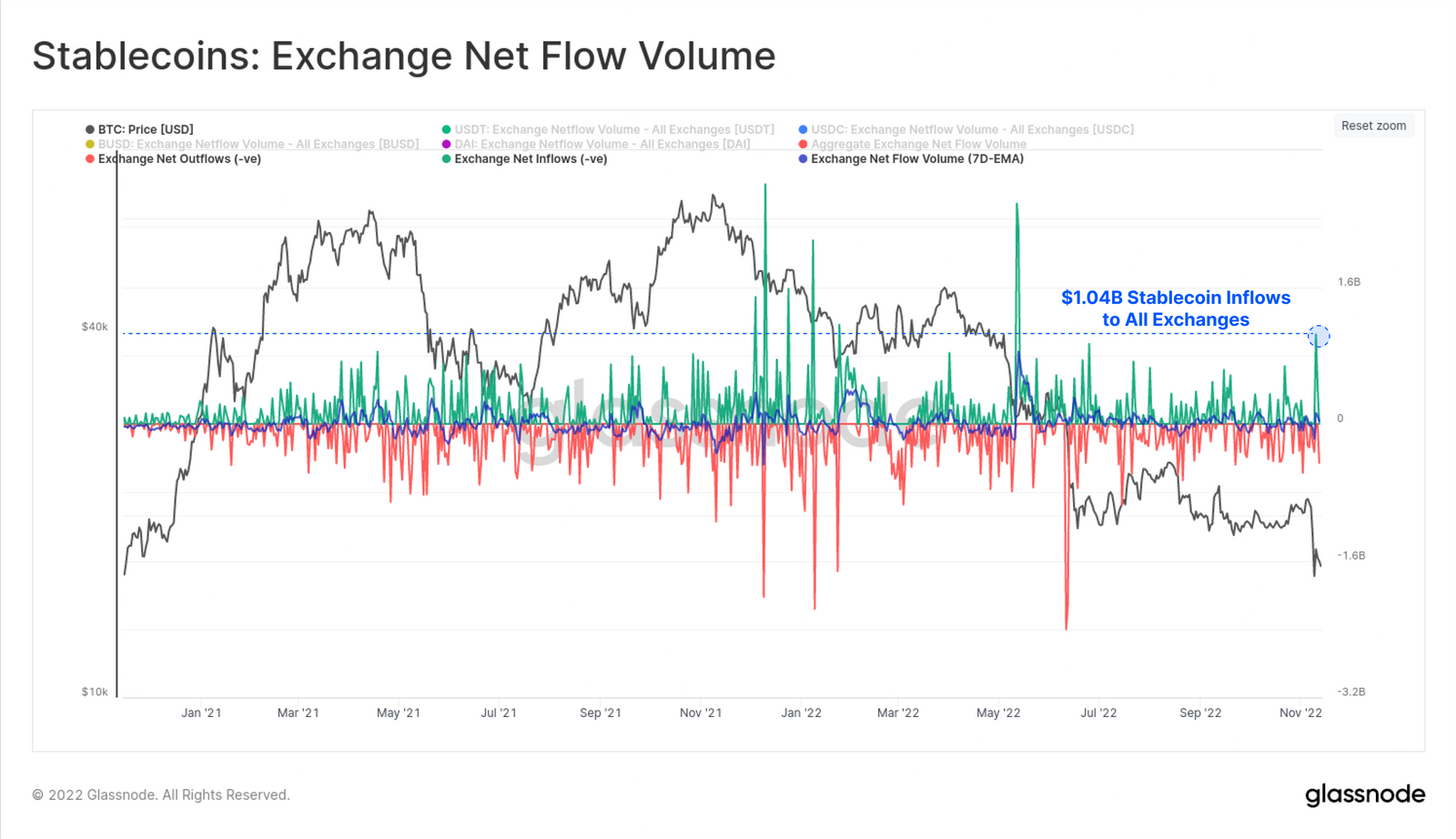 According to Glassnode statistics, with the influx of stablecoins into exchanges, the current total of $41.186 billion hit a record high. 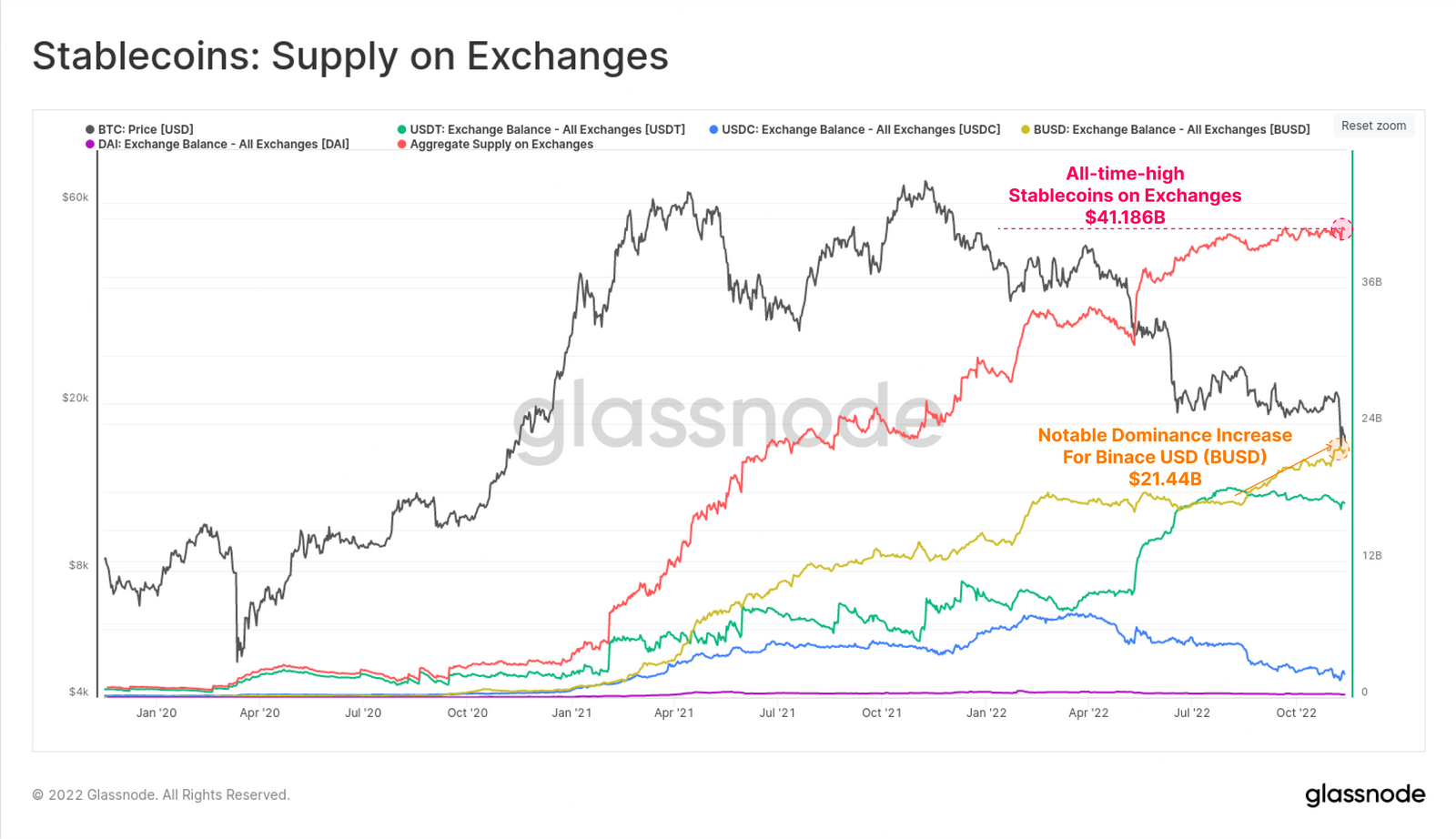 Bitcoin miners continue to be under extreme pressure, with data showing hash rates at all-time lows. The record low hash price caused miners to sell about 9.5% of their assets or about 7.76 million bitcoins. The sell-off marked the largest monthly drop in miner balances since September 2018. 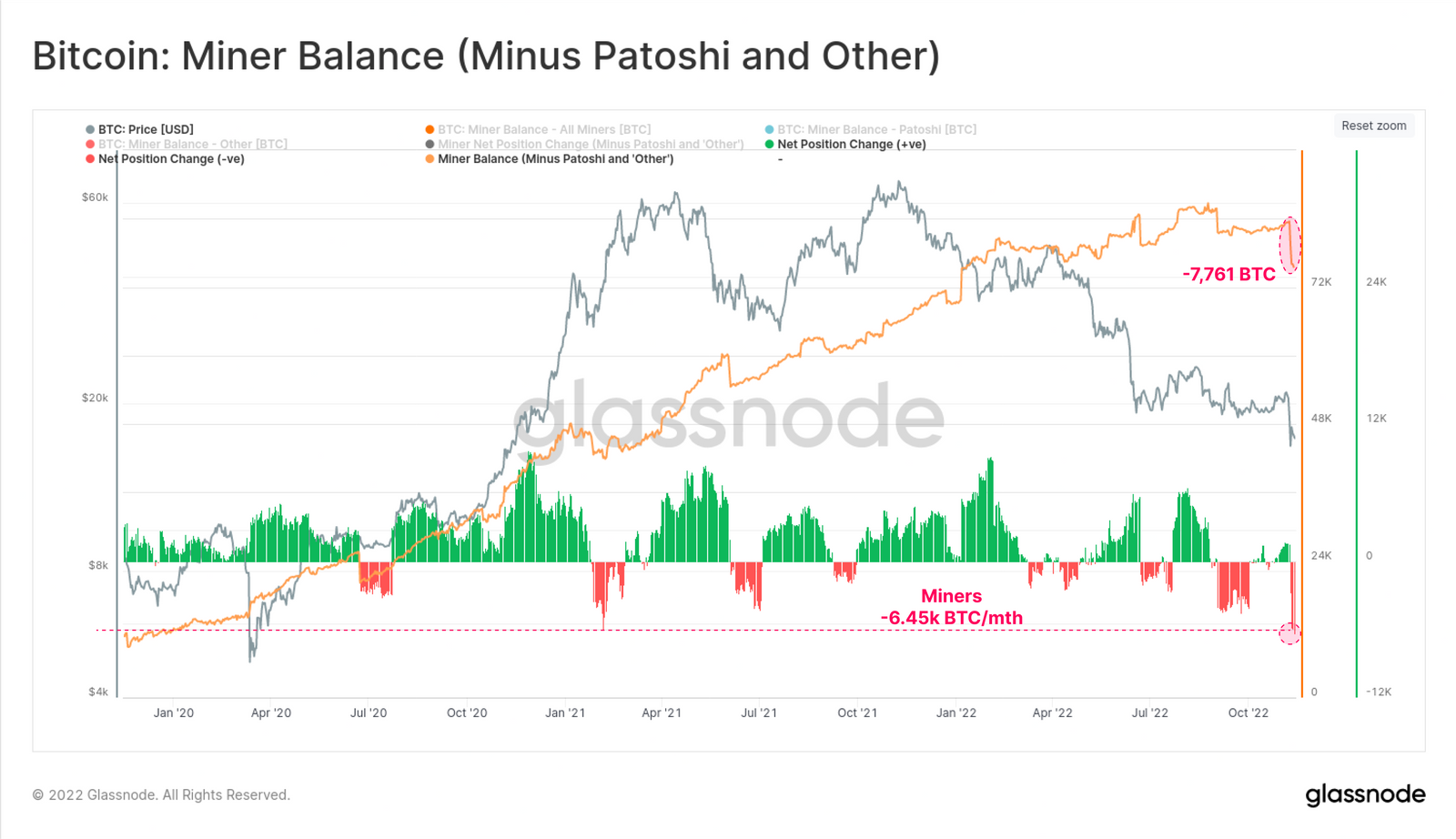 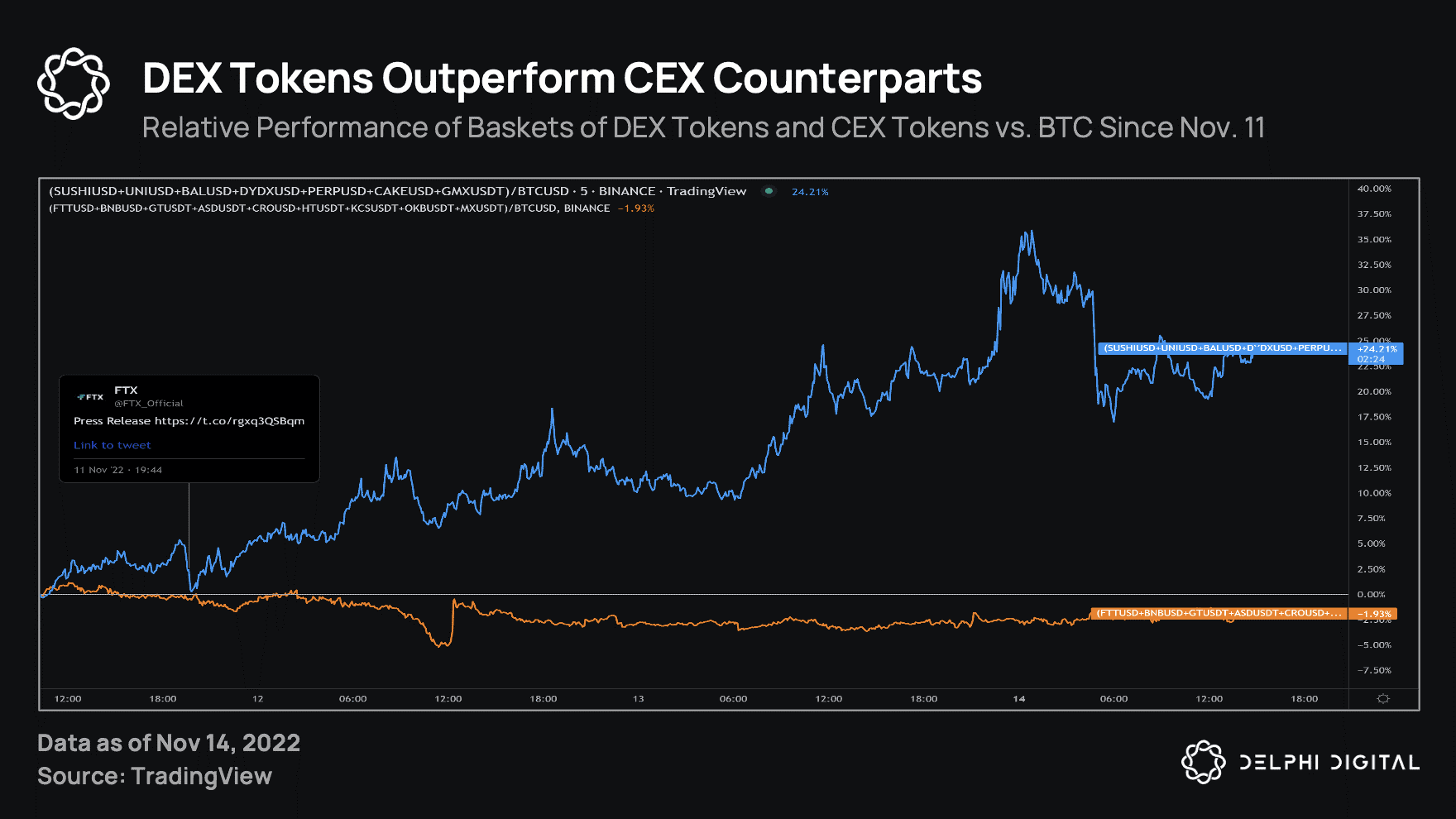 Overall, on-chain activity correlates with the overall sentiment in the Bitcoin, ETH, and altcoin markets. Specifically, the current chaos caused by FTX led to historic levels of outflows from the exchange and poor performance of CEX tokens. A possible trend emerging from the current chaos is the steady growth of self-custodial cryptocurrencies and DEXs as the go-to choice.