UNI, CAKE, and SUSHI appear to be following the bullish momentum of the top 3 cryptocurrencies by market capitalization: Bitcoin, Ethereum, and XRP. These DeFi coins are currently looking very promising as they are very close to a potential breakout.

Since hitting a high of $9.83 on July 28, Uniswap price has been falling and resistance is falling. The trendline also rejected the price on Aug. 14, making a lower low in the process.

On September 21, the UNI price fell to $5.14, well below the $5.80 horizontal support area. However, it reclaimed this demand zone shortly afterward, making the previous breakout just a deviation.

UNI then returned to the $5.80 area again on October 13, forming a long wick below in the process. This shows significant buying pressure, supporting the possibility of a breakout.

The daily RSI is also bullish. Previously, it formed a bullish divergence in early September, with the divergence line still intact. Since then, the indicator has risen above 50.

Although UNI has been slightly bearish over the past 24 hours, these data provide a bullish outlook and support a potential breakout.

PancakeSwap price chart is not as bullish as Uniswap’s.

CAKE price has been declining since September 29 after it was rejected at the $4.90 horizontal resistance area. The decline also confirmed a bearish divergence on the daily RSI, currently below the 50 levels, further fueling the bearish sentiment.

Currently, CAKE price is in danger of falling below the ascending support line formed on June 18.

In case of a breakdown, the nearest support levels for PancakeSwap are $4.09 and $3.48. These targets are the 0.382 and 0.618 Fibonacci retracement resistance levels respectively.

SushiSwap Price Prediction: Near the High of the Range

SushiSwap has been trading between $1.10 and $1.62 since early June. Similar to Uniswap, the price of SUSHI has been below the range twice.

This can sometimes be seen as a bullish development and usually precedes a sharp move higher. SUSHI has hit a local high of $1.58 so far.

Also, the daily RSI has formed a bullish divergence with its trendline still intact. Expect an eventual breakout of this range. If this happens, it could cause the price of SushiSwap to rise rapidly.

What should I do before investing in Defi projects?

At the height of the bull market, investing in DeFi tokens is as easy as turning the palm of your hand. But with money flowing into the industry plummeting from its heyday, it’s hard to identify good deals in the space.

And Summer DeFi, the protocol can attract liquidity providers by providing three-to-four-digit yields and multiple mechanisms such as liquidity staking, asset-backed loans, and staking token rewards. The problem here is that many of these rewards are unsustainable, and the high issuance of certain protocols causes liquidity providers to automatically dump rewards, creating constant selling pressure on token prices.

The total value locked (TVL) war is another challenge facing DeFi protocols. Because they must constantly compete for funds to maintain the number of “users” willing to lock tokens into the protocol. This leads to whales and other wealthy investors generously pushing funds into the platforms offering the highest APY rewards for a short period of time, before eventually dumping the rewards into the open market and diverting funds to more profitable projects.

In short, each of these scenarios creates a vicious circle in which the TVL of the protocol and the native token of the platform will essentially be launched, pumped, dumped, and then left in an “anonymous” state.

So, how to evaluate whether it is worth investing in a DeFi platform?

Do you have income?

Consider the two diagrams below. 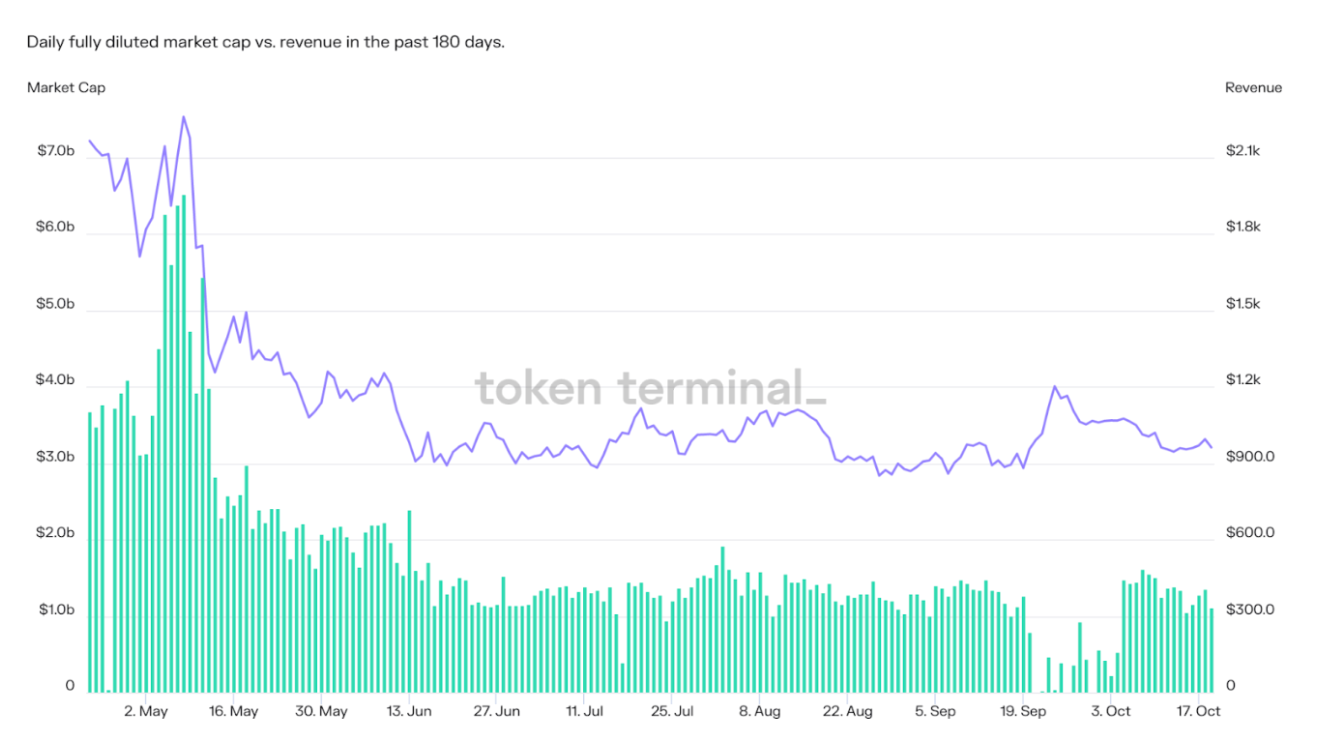 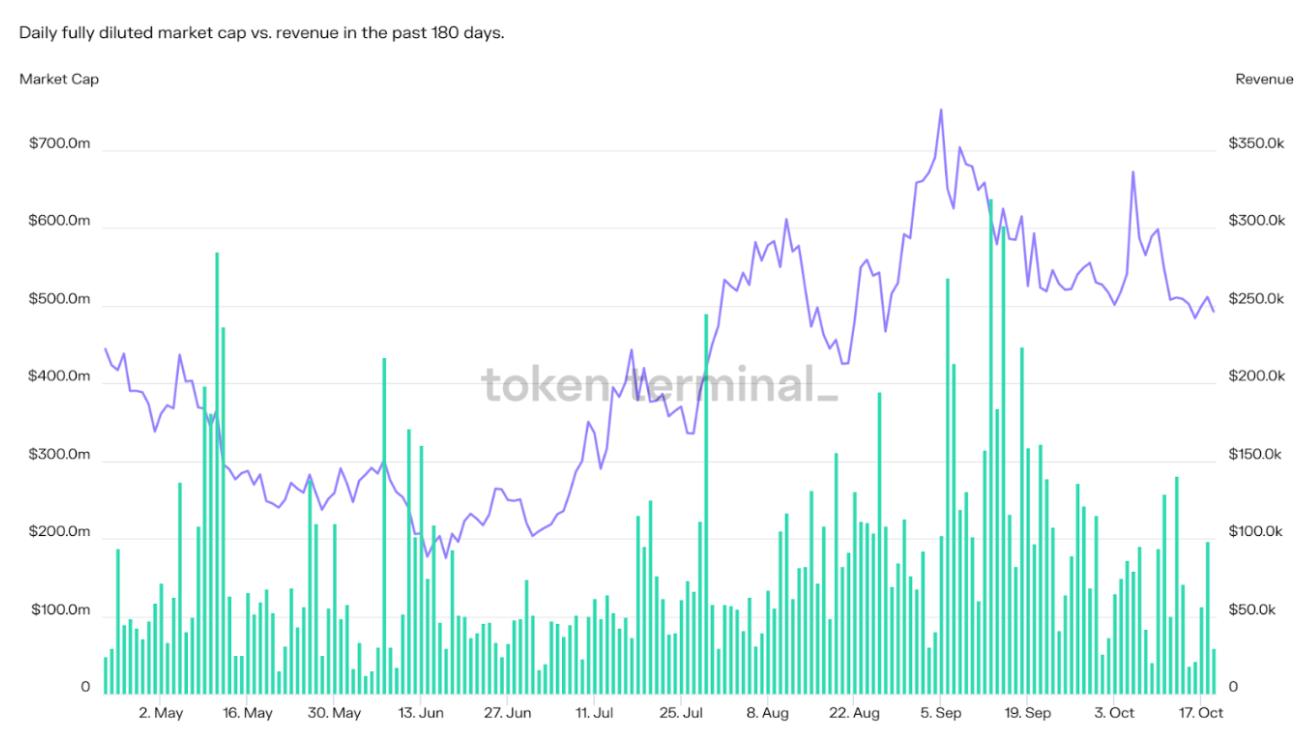 After looking at the above two charts, the first thing investors realize is the ascending chart and the descending chart, but there are actually more. In the first chart, Algorand (ALGO) has a float market cap of $2.15 billion and a fully diluted market cap of $3.06 billion. However, 30-day sales and annual sales are $7,690 and $93,600, respectively.

Going back to the first chart, we can see that while Algorand maintains a circulating market cap of $2.15 billion and supports a large ecosystem of various decentralized applications (DApps), sales on October 19th were only $336.

Unless there is something wrong with the data or Token Terminal is not tracking some metrics related to Algorand and the project ecosystem, this is shocking. Observe the chart legend, there are no token quotes or supply-side fees allocated to liquidity providers and token stakers.

GMX, by contrast, tells a different story. While maintaining a circulating market cap of $272 million and annual revenue of $28.92 million, GMX’s total supply-side fees have grown steadily to approximately $33.9 million as of April 24, 2022. Supply-side fees represent the percentage of fees sent to service providers, including liquidity providers. 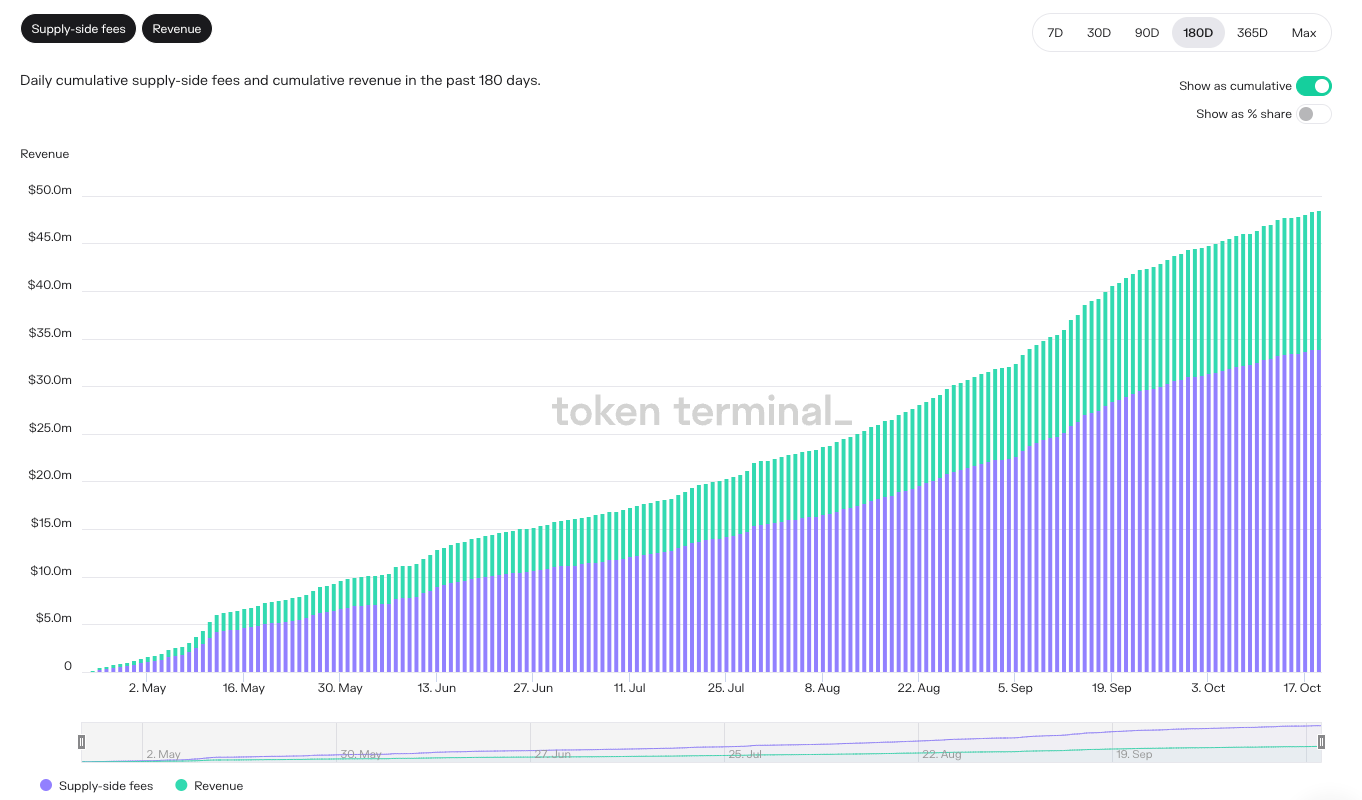 Before investing in a DeFi project, you should consider the total token supply, circulating supply, inflation rate, and issuance rate. These metrics measure the number of tokens currently in circulation in the market and the expected growth in circulating token issuance. For DeFi tokens and altcoins, dilution is something to worry about, as it adds to the appeal of Bitcoin’s low inflation and supply cap. 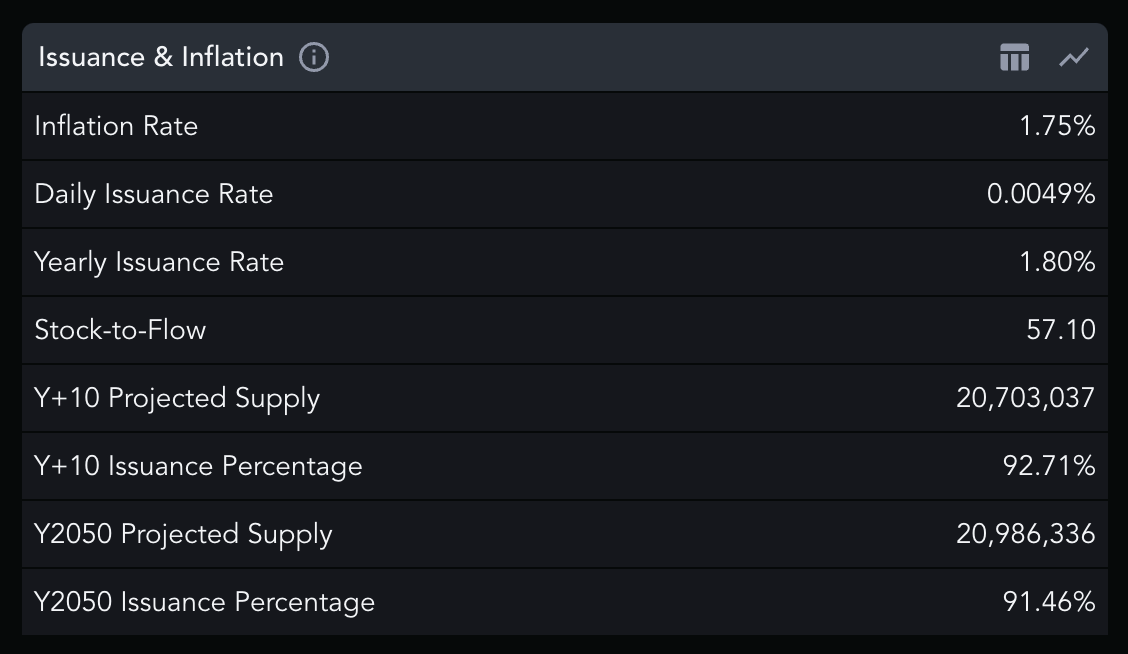 As shown in the chart below, ALGO has a high expected inflation rate and total supply compared to BTC. The total supply of ALGO is capped at 10 billion, of which 7 billion tokens are in circulation today. However, supply caps and inflation rates do not generate much confidence as current revenue comes from fees and levels that are shared with token holders.

Investors should wait for more growth and more daily active users in the Algorand DApp ecosystem before taking a stake in ALGO. At the same time, fees and revenues also need to be increased.

Whether the revenue is high or low, two other important metrics to check are the number of active addresses and the number of daily active users (if data is available). Algorand has a market value of billions of dollars and a maximum supply of 10 billion ALGOs, but its annual income is low and token incentives are few. Does the ecological development not look good?

Like most DeFi protocols, Polygon Network’s daily active users and the price of MATIC are steadily declining. According to CryptoQuant, there are 2,714 active addresses, which pales in comparison to 16,821 on May 17, 2021. 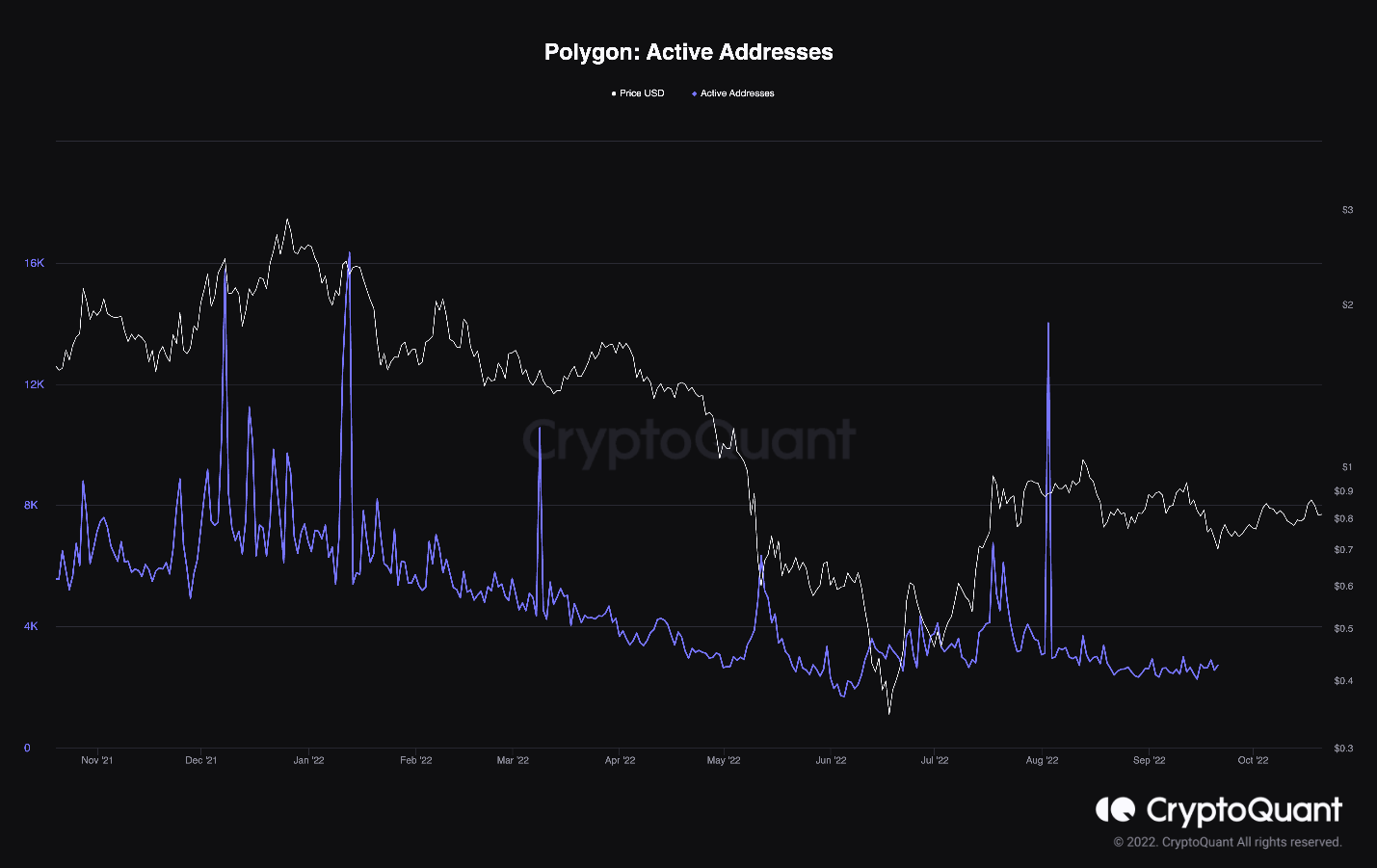 However, despite the decline, data from DappRadar shows significant user activity and volume spread across different Polygon DApps. 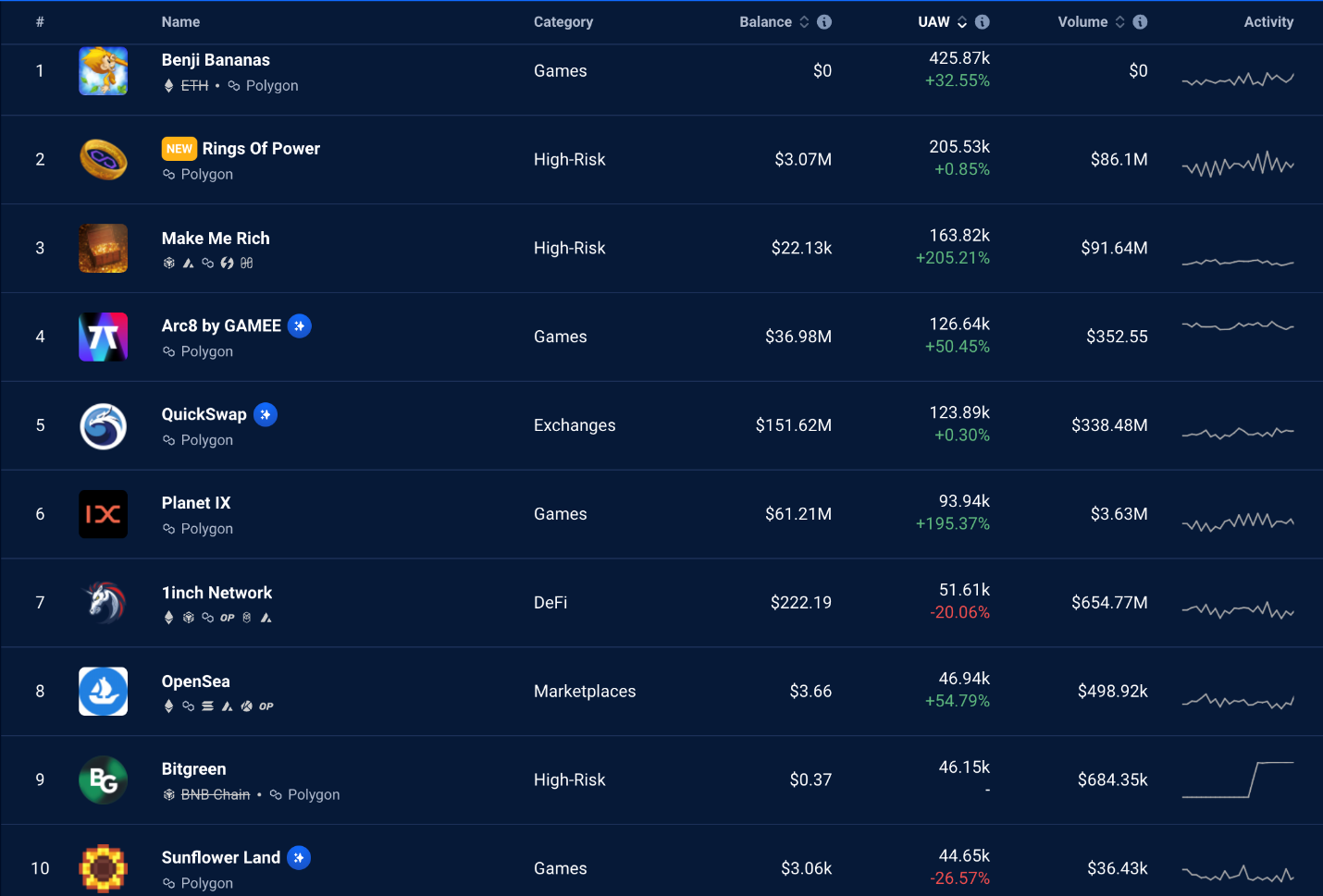 Unfortunately, this is not the case for Algorand Dapps. 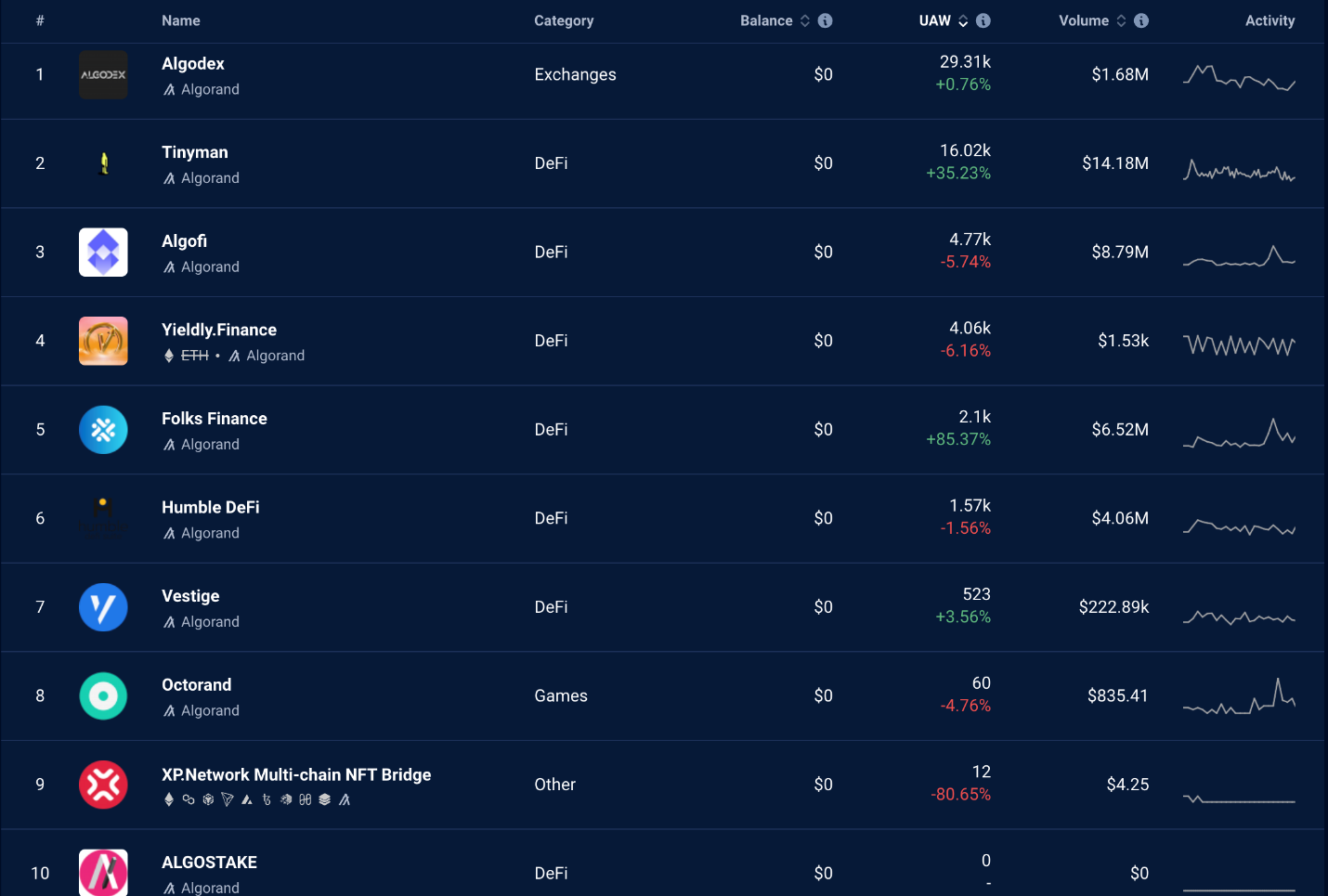 Currently, the cryptocurrency market is dominated by bears, making trading complicated for most investors. At this point, investors should probably wait rather than pray on every small breakout that proves to be a trap for the bulls.

Continue to watch the data to understand when a new trend emerges, and then dig deeper to understand how the fundamentals support the sustainability of the new trend.