On-chain data shows many suspicious signs ahead of FTX crash

Several clues to the biggest crash in crypto history emerged on Nov. 2 after sources released a trove of private financial documents from investment firm Alameda Research. Ventures is a trading company, owned by FTX founder Sam Bankman-Fried, and Exchange.

In the following week, 140 million FTT was transferred to Binance, and the price dropped from $26 to less than $2. This process triggered a bank run on FTX, a “hack attack” that allegedly siphoned $473 million from its reserves and declared bankruptcy.

– November 6: CZ founder announced that Binance will sell all FTT on its books in the next few months. Alameda CEO Caroline Ellison offered to buy Binance’s FTT for $22.

– November 8: Binance announced that they can buy back FTX. 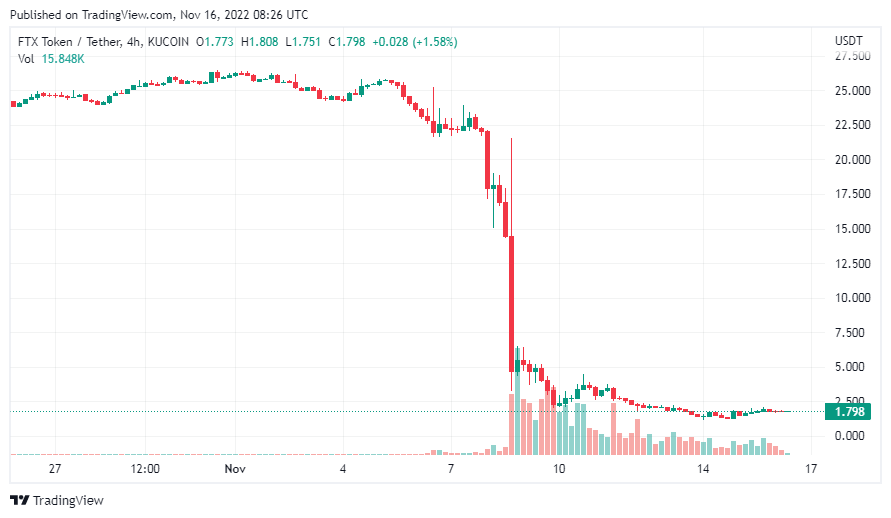 How does the FTX crash affect the entire cryptocurrency market?

The failure of FTX once again plunged the market into extreme panic, and BTC fell to a yearly low of $16,000. 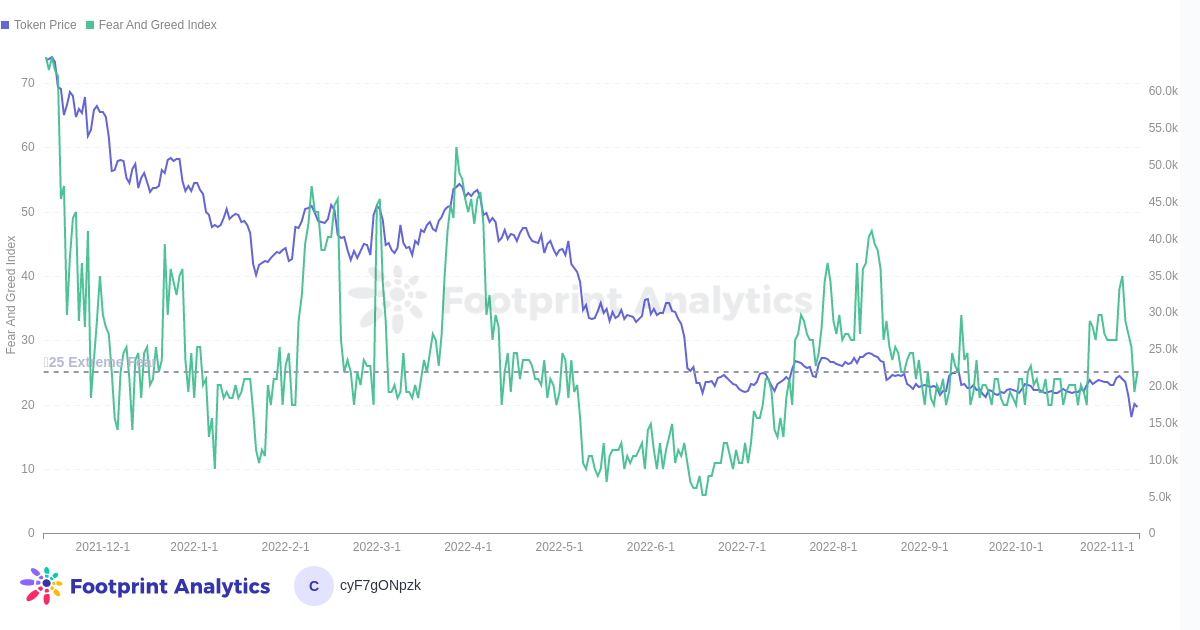 At first glance, Binance appears to be winning big in this situation, with countless memes joking about CZ being the genius mastermind behind the collapse of a top competitor. Although the BNB token rose to $368 in a short period of time on November 8, the price quickly slumped to a near 3-month low of $264. This situation is very confusing for the entire industry, and centralized exchanges feel pressure on them. 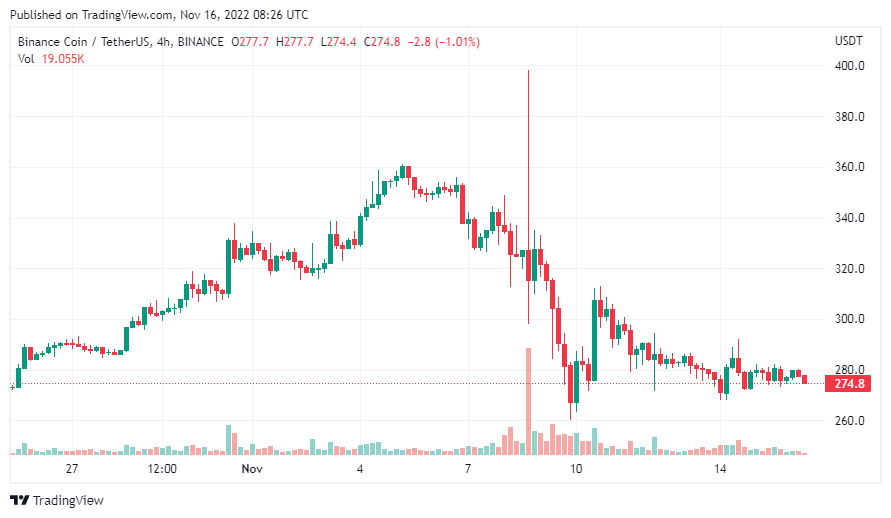 What can on-chain data tell us?

Before FTX crashed, there were a number of noteworthy on-chain signals that trouble was imminent.

On November 5, 75 million FTT were moved out of FTX, marking the sell-off following this event. More than that, the next two big sell-offs occurred on November 8 and November 13, which were about 110 million and 211 million respectively. 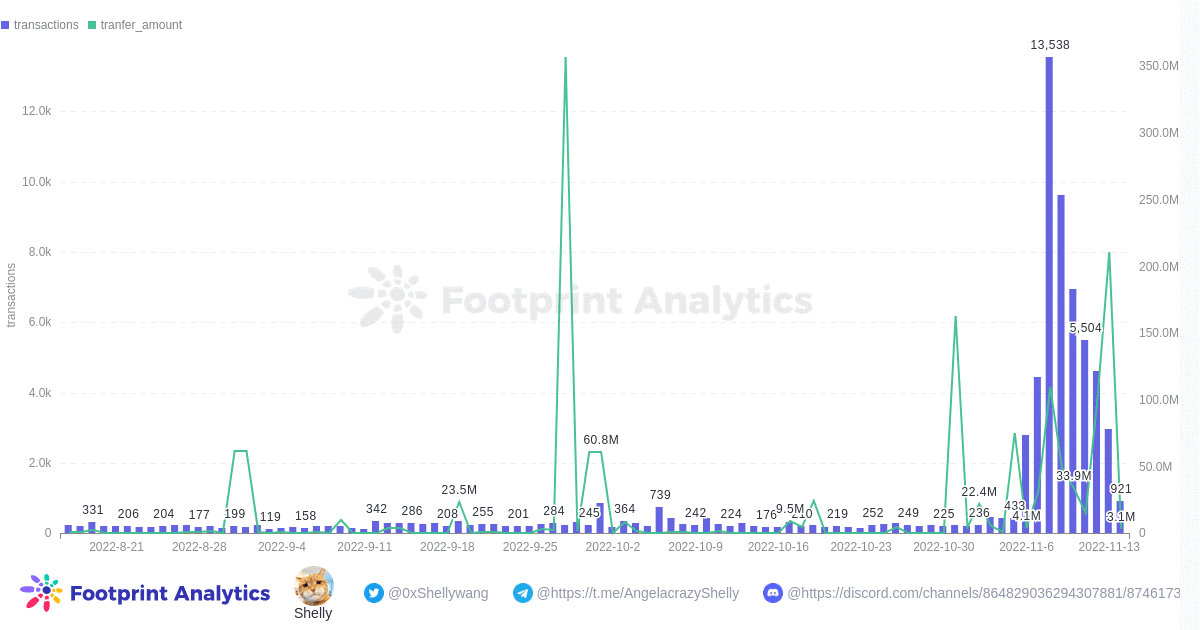 From November 2nd to November 8th, more than 140 million FTT tokens were transferred to Binance. Transaction volumes started to spike from November 5th and 6th, at around 45 million and 42 million, respectively. 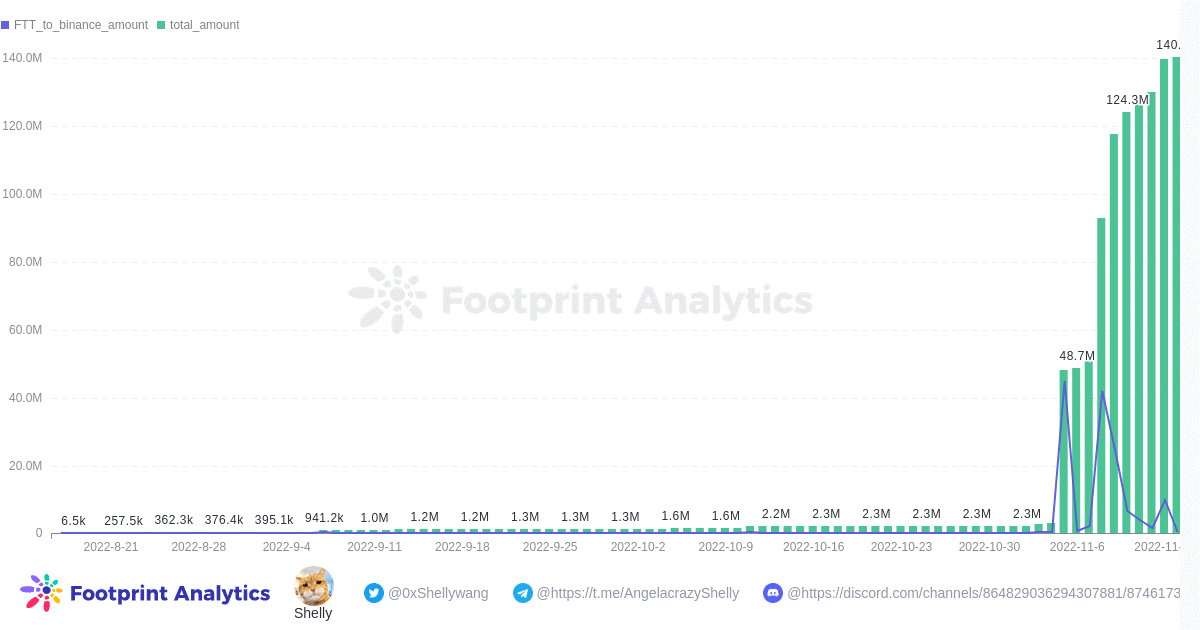 The amount of FTT transferred to Binance

At the same time, more than $1.4 billion in ETH was withdrawn from FTX’s balance. 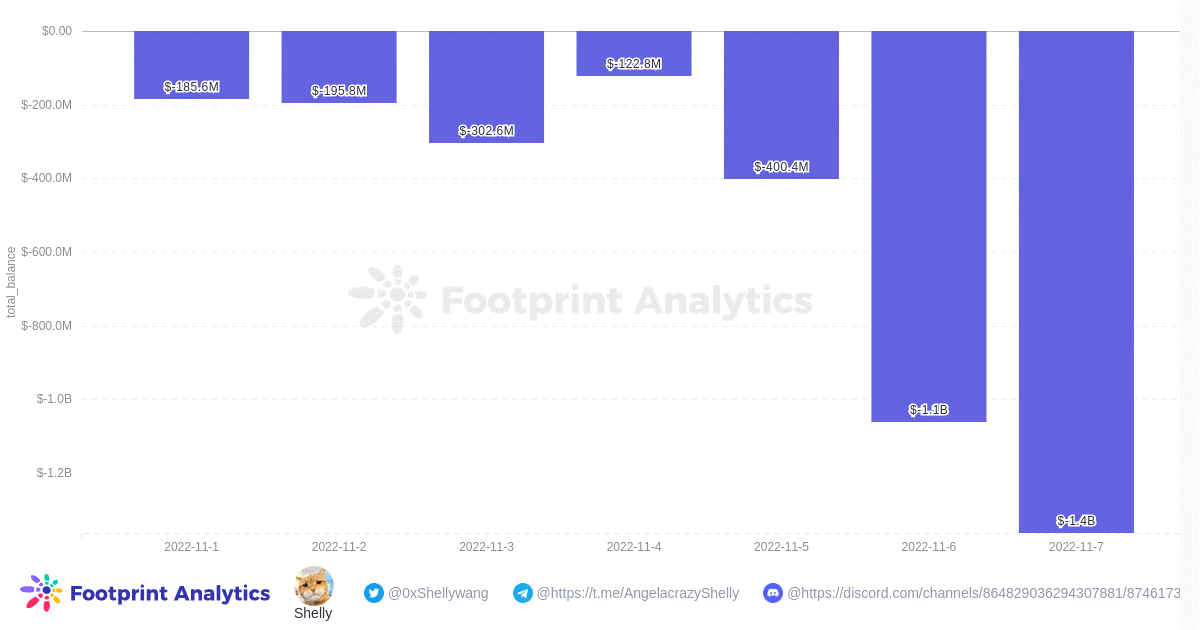 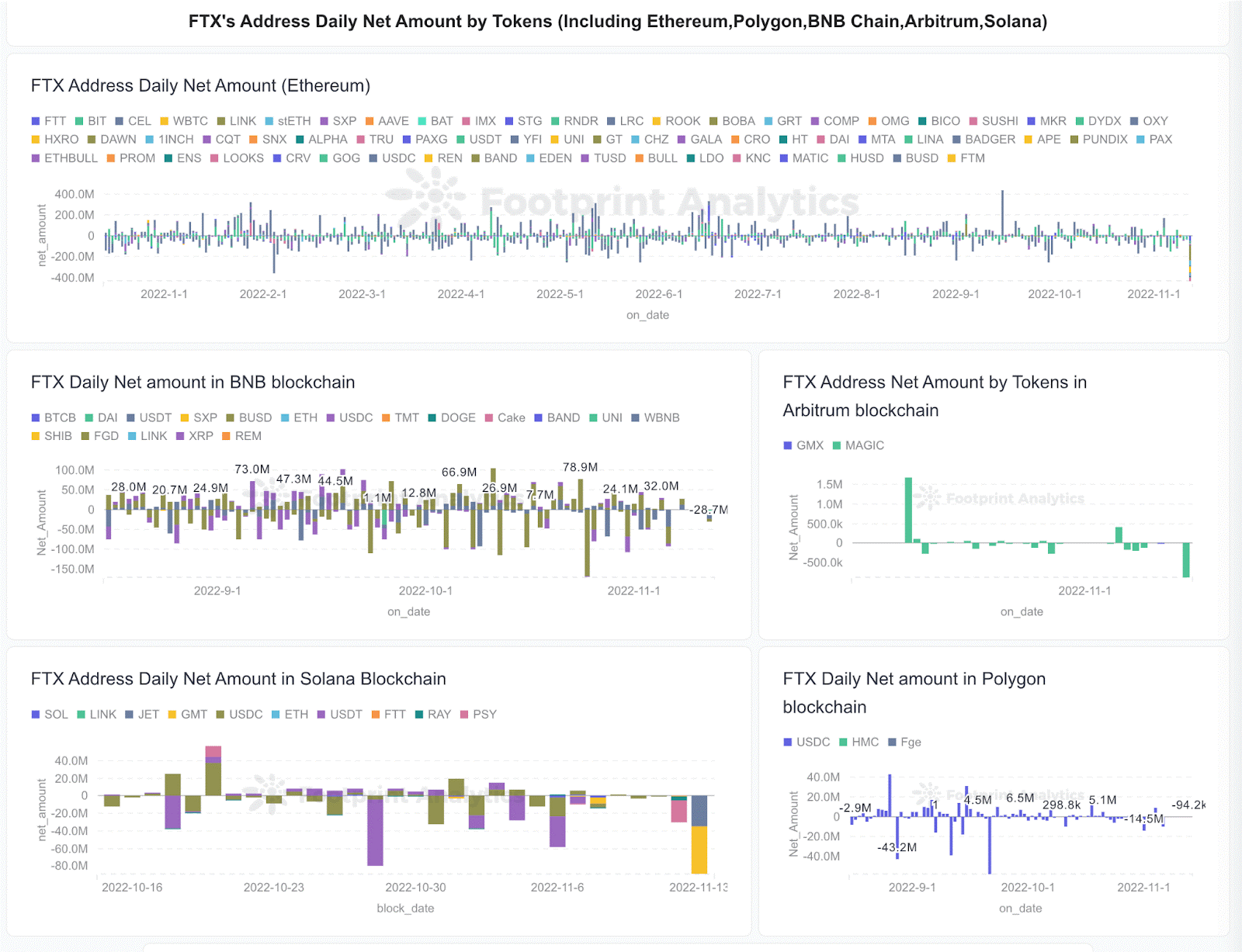 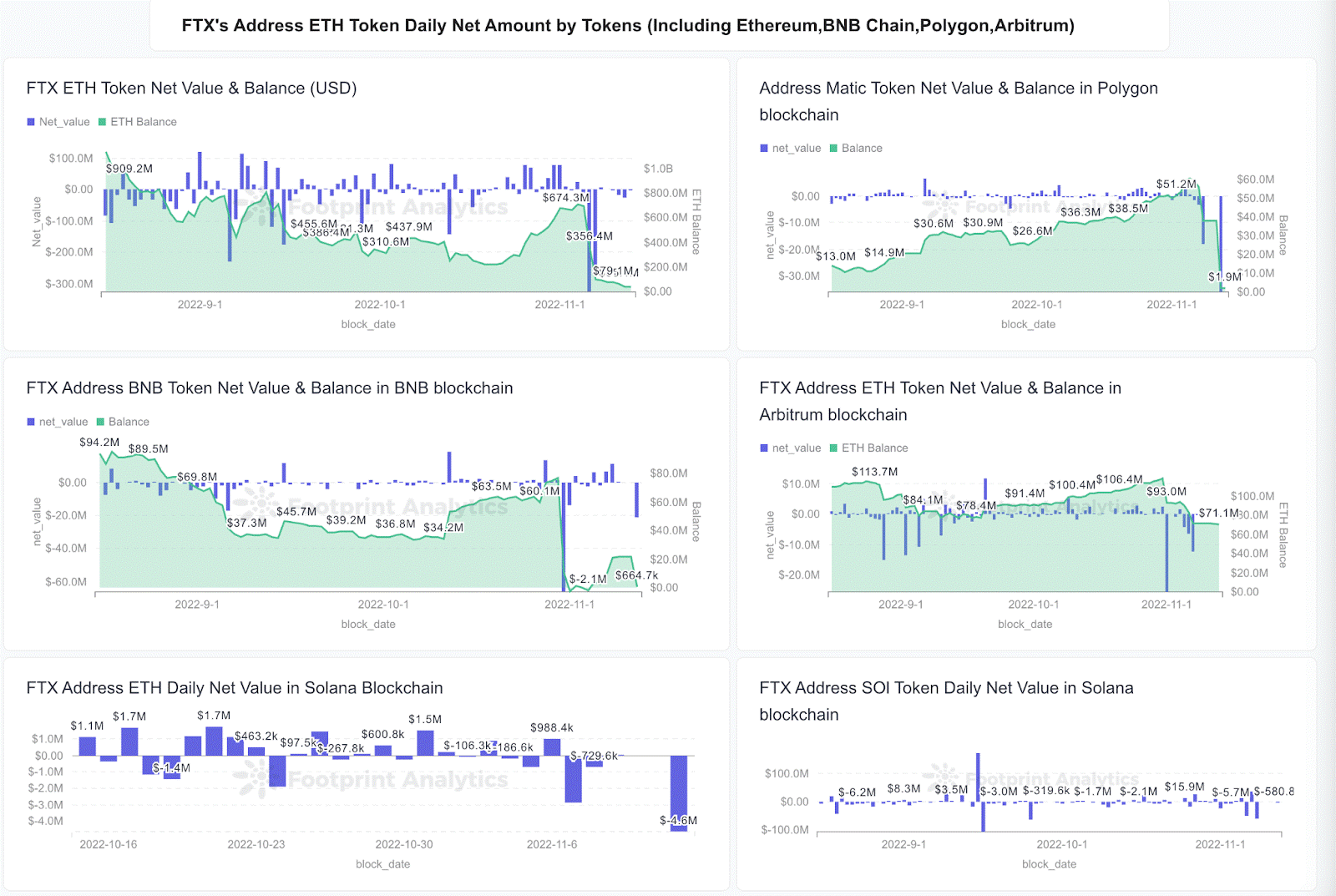 According to 0xScope, most of the money coming into FTX comes from other exchanges, especially Binance.

Since there are no retail deposits at this time, this must be FTX’s own funds, and there have been no cold wallet transfers in these 2 days.

Thus, this signal led to FTX potentially transferring user deposits to other exchanges for other purposes (Alameda’s market making) and never cold wallets for emergency purposes. 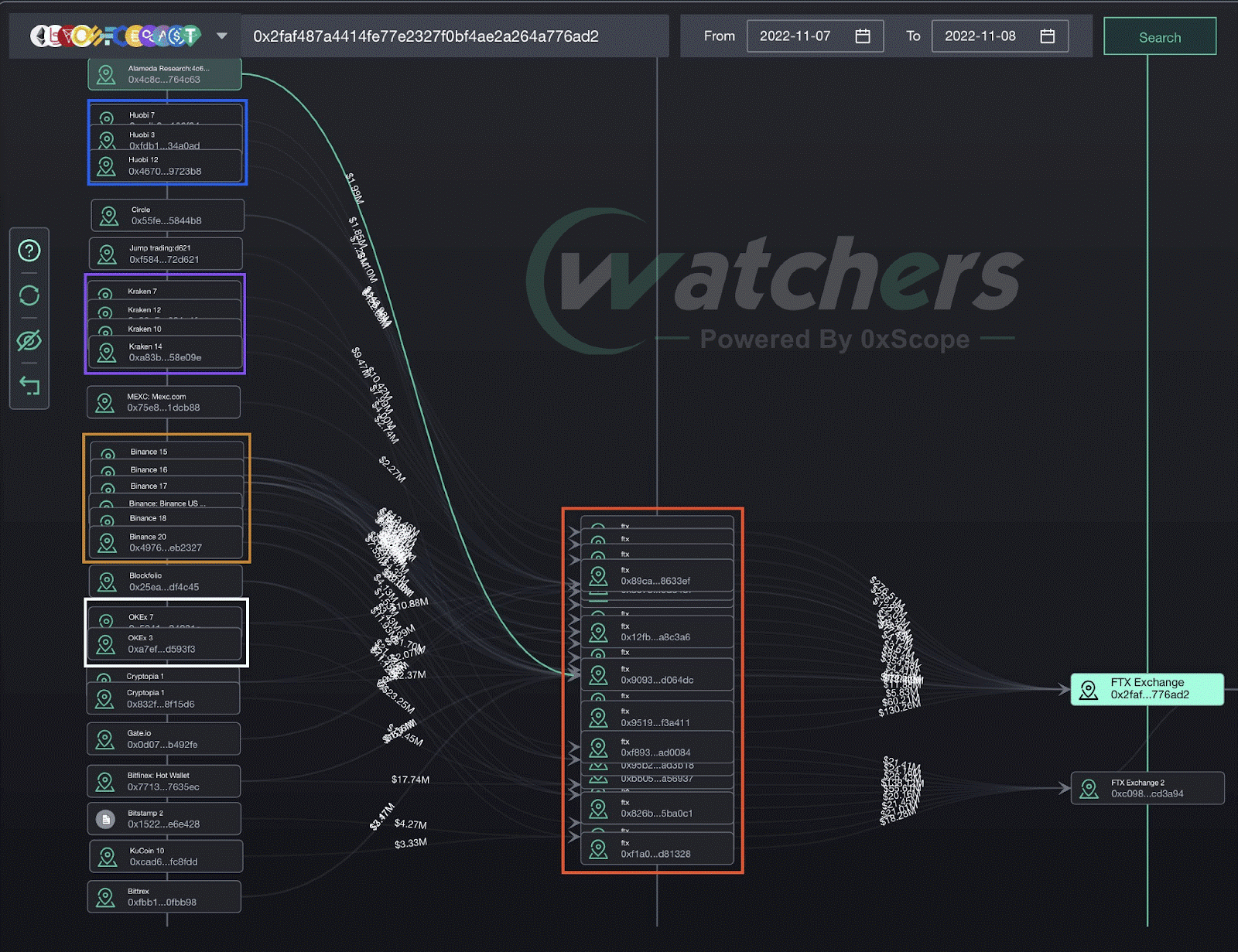 The long-term matching of assets and accounts of SBF and Alameda individuals is also tracked by 0xScope’s entity graph.

This process works for any address. We can find correlations between a selected set of addresses and identify groups of addresses, and sometimes even use this tool to find addresses you forgot.

Therefore, within Alameda, there is no separation between SBF and the company. SBF controls Alameda’s funds and accounts to do as it pleases.

By monitoring on-chain data, you can spot early warning signs and keep your funds safe, whether you use a centralized or decentralized exchange. In the case of FTX, several key indicators suggest that the platform is no longer trusted, with insiders scrambling to exit.

Use on-chain data to track and secure your assets

FTX has invested in more than 57 projects out of 187 investments.

Some important metrics to track coins include:

– Number of tokens and daily transactions.

– Whale Watch: If a sell-off occurs and the price drops, only after the decentralized activity stops falling and the big whales stop selling will the token in question bottom out. 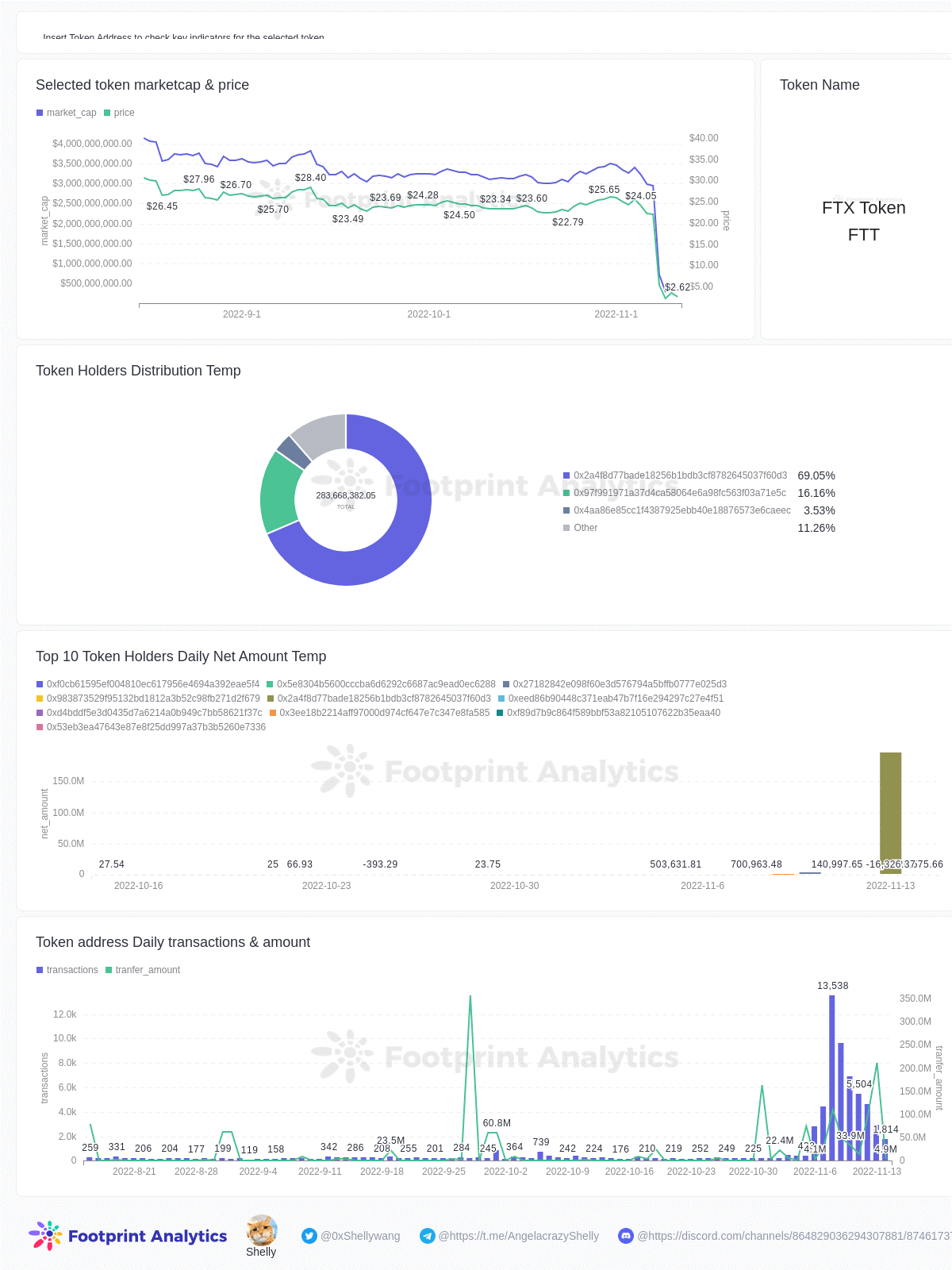 In a tweet on September 11, CZ stated that all trading platforms should implement a Merkle Tree proof of reserves. Banks operate on fractional reserves, but cryptocurrencies shouldn’t. Binance will soon begin implementing Proof of Reserves in a fully transparent manner. Since then, several exchanges have announced their reserve wallet addresses.

FTX Bitcoin Vault Worth 840,000 BTC of Mt.Gox Before Hacked

If FTX makes a new low in the Bitcoin bear market, then BTC price action will fall further to the levels seen during the Mt.Gox crash.

Data from on-chain analytics firm Glassnode confirm “Bear Mt. Gox about a decade ago” is still well below the 2022 lows.

Soar and Mt.Gox: similar but different

As the fallout from the FTX bankruptcy scandal continues to unfold, it is unclear how many major cryptocurrency entities will be affected and how much damage will be done to the industry.

BTC fell more than 25% in the week before the incident and has yet to fully recover.

At the same time, there are many tweets comparing FTX to Mt. Gox: Mismanagement, poor security, and allegations of insider trading were all cited.

However, the data revealed some other interesting numbers worth remembering.

Over the next few months, Bitcoin’s value dropped 85 percent from its peak, bottoming out in January 2015 — nearly a year after the hack.

This cycle became the first Bitcoin bear market witnessed by holders at scale, and another ATH was not recorded until December 2017.

The timeframes between FTX and Mt. are similar. Gox, the question that analysts have to address is if BTC price action is down another 10% or worse from the previous peak.

Even before FTX failed, there were many $10,000 price predictions. Meanwhile, this black swan bankruptcy has set the crypto industry back a few years, as the Binance CEO warned. 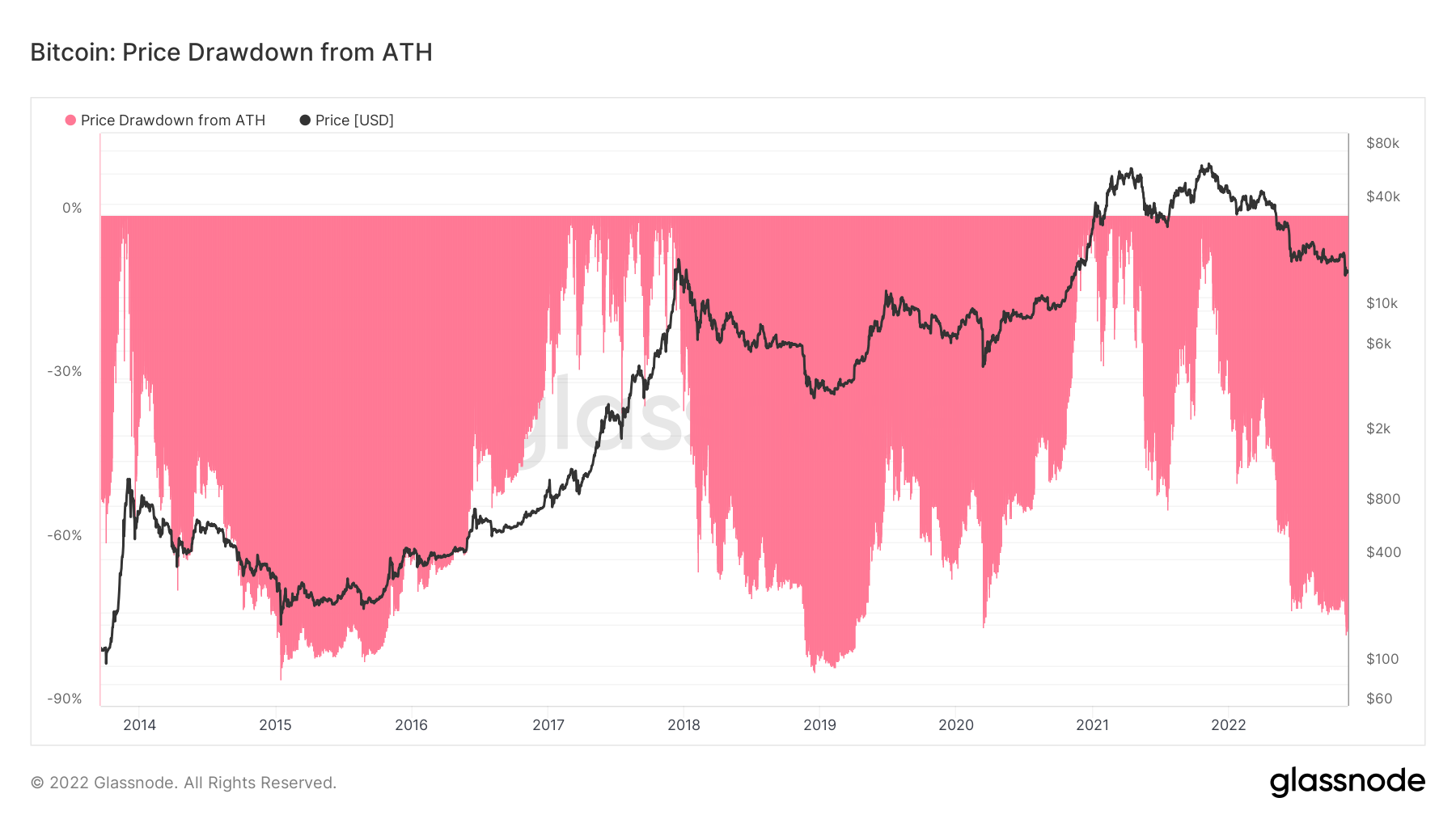 Drop rate of bitcoin from This All-time high | Source: Glassnode

It seems inappropriate to compare FTX to a similar black swan event nearly 10 years ago. However, the numbers involved are eerily similar in some respects.

Mt. Gox lost 840,000 BTC, worth about $460 million at the time. Before the shutdown, FTX allegedly had a Bitcoin balance of 20,000 data From the on-chain analytics platform CryptoQuant — also worth over $400 million.

However, this year’s losses are insignificant compared with 2014’s losses as it represents only a small fraction of the market capitalization.