Despite a strong start, the global macroeconomic environment has had an impact and a negative impact on the cryptocurrency market, which has undergone some disruptive corrections. The same goes for the NFT market.

However, new data shows that NFT businesses are still in high demand.

In the third quarter, NFT transaction volume increased to $2.71 billion, down 67% quarter-on-quarter. But sales were up 8.3 percent from the second quarter, according to the latest data from DappRadar.

Compared with the previous month, NFT trading volume in September increased by only 10.4%. In addition, sales increased by 21%, reflecting that the NFT business is still in high demand. On the other hand, the overall decline in trading volumes can be attributed to the decline in the market value of cryptocurrencies.

The report also shows that the volume of NFT transactions on Ethereum has dropped by 76% compared with Q2, but the number of transactions has increased by 11%. Solana’s NFT transaction volume increased 96% quarter-over-quarter but was still down 63% from the second quarter.

The introduction of the y00ts series gave Solana a boost. It surpassed NFT giant OpenSea’s sales leaderboard a month after its launch and earned 435,000 SOL or nearly $15 million in secondary revenue.

Along with y00ts, Renga is another series dominating the NFT market.

The sector stagnated severely during the bear market, but blue chips like Yuga Labs: OtherSide, Bored Ape Yacht Club, Mutant Ape Yacht Club, and CryptoPunks have maintained their dominance. These four projects account for more than 46.21% of the total NFT market capitalization.

“This is an optimistic sign for blockchain gaming, as many believed that gaming Dapps would lose a large portion of their player base if they ceased to be economically profitable for the average user. This turned out to be wrong.”

What does The Merge mean for NFTs?

Merge changes Ethereum’s consensus mechanism from Proof of Work (PoW) to Proof of Stake (PoS). This means that new blocks are no longer mined (calculations that solve the algorithm) through transaction validation. Instead, new blocks are proposed by network validators. They are the ones who lock up a certain amount of network tokens (ETH in this case) to qualify for the draft. NFTs are notorious for requiring a lot of block space and transaction speed when creating sets, which has proven problematic for Ethereum under PoW. This article will examine whether PoS can help improve the network’s metrics to better handle periods of high demand.

For PoW, block time (the time it takes to generate a block with transactions) is a measure that reflects the hash rate required by the network to process transactions and the difficulty set by the algorithm used to verify transactions. So this value is not fixed, ranging from 12-15 seconds. Correspondingly, the number of blocks per day can vary widely, affecting the number of transactions the network can process.

With the advent of PoS, these situations have changed. Now, the block time is fixed at 12 seconds and has a different name (slots). Furthermore, slots are grouped into epochs, each with 32 slots. This makes block production stable, as shown in the diagram below.

The merge happened on September 13th and we can clearly see that the daily block count has increased and block times have actually stabilized since then. This increases the supply of block space for transactions.

Number of transactions per day on Ethereum | Source: Ethereum

From the chart, due to the increase in the number of available blocks, the number of daily transactions has slightly increased after switching to PoS, and the lower limit is more stable (about 1.1 million transactions).

Another metric relevant to NFT transactions is gas prices. Specifically, how much it will cost a user to send a transaction. Its value is directly related to the space requirements within a network block. The greater the demand, the higher the price.

When a collection is minting NFTs, there will often be a large number of users trying to send transactions in a short period of time (because the number of NFTs is limited). In this case, users will need to pay more to broadcast the transaction because the block size is limited.

Ethereum’s current update doesn’t change that, as it has no relevant upgrades to the network’s block size. The chart below, which shows gasoline prices before and after the merger, clearly shows this.

There is no relevant change in block space demand before and after Merge, and the gas price remains unchanged. The upgrade that will have a major impact on the situation is called “The Surge” and is expected to roll out in 2023. The surge will introduce a “sharded” network, allowing blocks to be processed in parallel, increasing the supply of block space on the network. 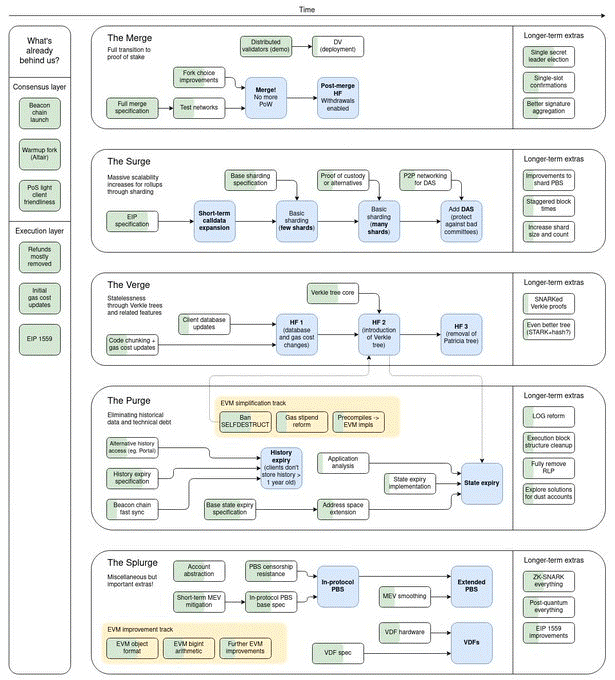 According to the Ethereum upgrade roadmap above, all upcoming upgrades will focus on scalability and performance improvements to make Ethereum a high-throughput blockchain.

The main change in Merge is the introduction of the PoS consensus algorithm to one of the leading public blockchains. This brings stability to Ethereum’s block times while also reducing the energy consumption of the network.

While The Merge will not bring significant changes to the overall metrics of the Ethereum blockchain, it is a necessary step in increasing the transaction outputs that The Surge will provide.

The NFT industry has yet to test this new Ethereum setup to verify its ability to handle the increased demand load, as the number of NFT transactions did not surge after the September 13 merger.

However, due to more block space, theoretically, the network should be more efficient than in previous conditions. This will be evident when the next super hype happens.