From the perception that Bitcoin could drop to $13,000, to Sequoia Capital accepting a loss of $213.5 million invested in FTX. Here are some highlights from the crypto market.

JPMorgan researchers believe that the price of the world’s largest cryptocurrency, Bitcoin, could drop as low as $13,000 due to the FTX disaster.

Notably, the U.S. banking giant believes that Bitcoin could fall below its production cost, which is around $15,000.

JPMorgan predicts that the market will have to deal with “massive margin calls” in the coming weeks triggered by the collapse of one of the largest cryptocurrency exchanges.

Bitcoin has now recovered to around $16,500, but many analysts believe that the king of cryptocurrencies may be heading lower. Mark Newton, head of technical strategy at Fundstrat, predicted that Bitcoin could test $13,000 before finding any support.

However, Newton did not rule out the ability of the bears will push the largest cryptocurrency below $10,000 with unusually high volatility.

Hash Ribbons and security are at ATH, but its mining volume is dwindling which could kill miners.

As of this morning, there are 5,437 BTC revoked miner traffic index from 4:00 (UTC). Miner withdrawals can be interpreted as increased selling pressure.

Rumors abound of Nasdaq-listed miners being unable to repay their debts. If they go bankrupt, they will have no choice but to be forced to sell BTC.

Therefore, it is necessary to pay close attention to the withdrawal table of miners. If the number of miners withdrawing increases, BTC is likely to fall further.

Past miner bankruptcies have formed bottoms in BTC, which many investors see as a buying opportunity.

It’s unclear how long the domino effect will last, but investors’ losses this year have been substantial. 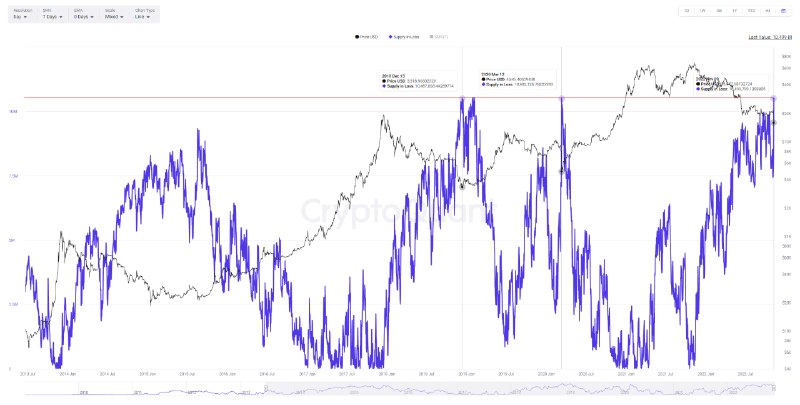 Reuters source confirms With Voyager out of business, Alameda Research is one of the major players affected by the liquidity crisis, and other major cryptocurrency institutions are also strapped for cash. However, the full extent of the damage suffered by Alameda could not be ascertained.

Despite being worth $15 billion, Alameda was so poor that FTX CEO Sam Bankman-Fried had to bail out. Sam managed to move at least $4 billion in FTX to Alameda. In return, Alameda Research will use its own FTT tokens and a 7.6% stake in Robinhood Exchange as collateral for the loan.

It’s worth mentioning that some of that $4 billion are in customer deposits. While not specifying an exact amount, Bankman-Fried reportedly did not discuss supporting Alameda with other FTX leaders.

The Series B investment was co-led by joint ventures Mubadala Capital and Korelya Capital following a report On Sept. 11, Ramp raised $53 million in a Series A funding round that closed in December 2021, bringing its total capital to approximately $123 million.

Ramp management said the new funding will be used to improve its product line, expand into new locations, and increase the number of fiat currencies and payment methods offered.

Kris Marszalek, CEO of crypto exchange Crypto.com, has become the latest crypto firm to promise to deploy “Audited Proof of Reserves” in the event of a crisis for the FTX exchange.

“We all believe that crypto platforms need to publicly share proof of reserves,” Marszalek said, adding that his firm “will publish evidence of its audited reserves in due course.”

Following the FTX incident, Binance CEO Changpeng Zhao also pledged to launch a proof-of-reserve audit system to provide the public with detailed information about the status of its reserves.

Ethereum Extension Protocol, Starknet, Medium Announce Launched a new governance organization, the Starknet Foundation. The organization will be responsible for funding and financing the new Starknet protocol, in line with Ethereum’s open-source and decentralized standards.

The platform will receive 50.1% of the total supply of StarkNet tokens used for the above purposes. Additionally, the Starknet Foundation is free to assume any Starknet-related position.

The Starknet Foundation initially had seven board members serving as key leaders for the long-term direction of the foundation. In particular, the presence of Andrew McLaughlin, the former U.S. vice president for technology during the Obama era, and prominent blockchain critic Eric Wall. The board operates under a majority voting structure.

Blockchain-based intelligence firm TRM Labs Announce On Sept. 11, its Series B round was expanded by $70 million, bringing total funding to $130 million. Series B investor Thoma Bravo is one of the world’s largest private equity firms with over $122 billion in assets under management.

The round was led by Thoma Bravo, with participation from Goldman Sachs and previous investors PayPal Ventures, Amex Ventures and Citi Ventures. The expansion follows a $60 million Series B round led by Tiger Global in December 2021.

The company said the funds will support product development and recruiting to provide tools that can combat illegal and financial fraud, as well as meet the need for disaster response services and training programs.

Over 30 million SOLs have been unlocked. In theory, more than 63 million SOLs were unlocked at 15:30. However, the Solana Foundation has withdrawn 28.5 million SOL to replace validators that the Hetzner company no longer supports, which will be unlocked at a later date.

Even so, 30 million SOL is now worth about $450 million. Judging by Binance’s liquidity, there are currently only about $30 million in bids. So if another SOL “discharges” at the same time, the market won’t be able to bear it.

However, SOL witnessed unlocking before that and then the price was still safe, but that was when Sam and the FTX exchange were not in a state of crisis.

In its latest quarterly earnings call on 9/11, blockchain financial services company Galaxy Digital, disclose They have invested $76.8 million in FTX exchange, including cash and digital assets. Of these, Galaxy Digital said $47.5 million is currently in the process of being divested.

A day earlier, FTX announced that it had halted all withdrawals after facing a liquidity crisis.

Given the current situation, Galaxy Digital said it has $1.5 billion in liquidity, including $1 billion in cash and $235.8 million in stablecoins to cover losses. In the quarter that ended Sept. 30, the company’s partner equity fell 12% year-over-year to $1.8 billion due to a decline in the market value of cryptocurrencies.

Sequoia Capital accepts a $213.5M loss on investment in FTX

Notice on the morning of November 10, Sequoia Capital said that due to recent events with FTX and a lack of understanding of the full nature of the case, Sequoia recorded the value of its investment in FTX as zero.

Sequoia further revealed that its Global Growth Fund III has invested $150 million in FTX and FTX US, while the SCGE Fund has invested $63.5 million. These investments are made in 2021.