ETH price weakens near key support, but traders are afraid to short

From November 10 to November 15, ETH prices were stuck between $1,170 and $1,350, forming a relatively narrow 15% range. Against this background, investors continue to analyze the negative impact of FTX Exchange’s application for Chapter 11 bankruptcy protection on November 11. 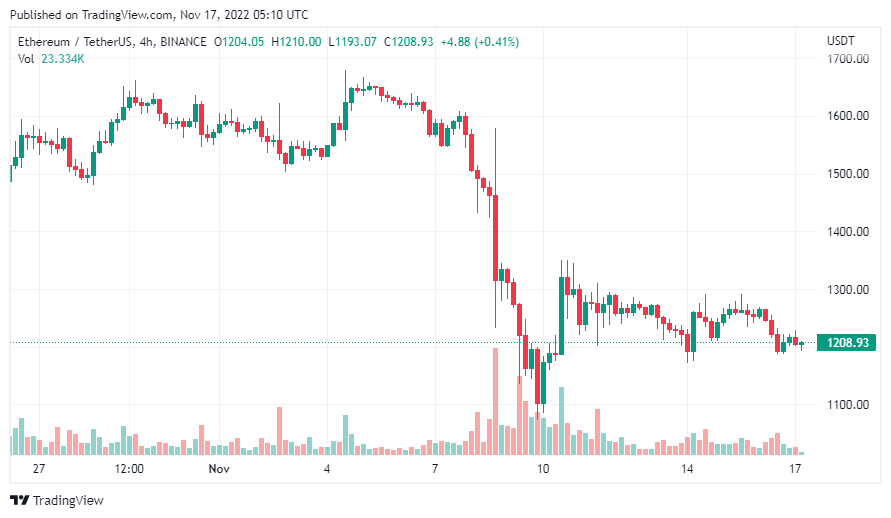 At the same time, ETH’s total market volume increased by 57% from last week to $4.04 billion per day. The data is even more relevant given the collapse of Alameda Research, a market maker and arbitrage firm controlled by FTX founder Sam Bankman-Fried.

While the risk of contagion has prompted investors to withdraw funds from centralized exchange wallets, the move has led to increased activity on decentralized exchanges (DEXs). As proof, Uniswap, 1inch Network, Dydx, and SushiSwap have seen a 22% increase in the number of active addresses since November 11.

Let’s take a look at the following derivative indicators to better understand how professional traders position themselves in current market conditions.

Margin trading allows investors to borrow money to leverage their positions, increasing profits (and risk). For example, one can increase their exposure to cryptocurrencies by borrowing USDT to buy ETH. On the other hand, borrowing ETH can only be used for shorting or betting on bearish momentum.

Unlike futures, the balances between long and short margins do not necessarily match. When margin loans are high, it indicates a bullish market and vice versa.

The chart above reflects investor sentiment, which peaked on November 13 when the ratio reached 5.7 — a two-month high. Since then, however, traders on the OKX exchange have indicated that betting on an uptrend has become less necessary as the indicator has gradually slipped to its current level of 4.

However, the absolute value of loan interest rates tends to rise now, which is conducive to the high-spread lending of stablecoins. Notably, overall sentiment has improved since Nov. 8, as traders increased demand for long-margin orders using stablecoins.

There are sometimes methodological differences between exchanges, so viewers are advised to track changes rather than absolute numbers. 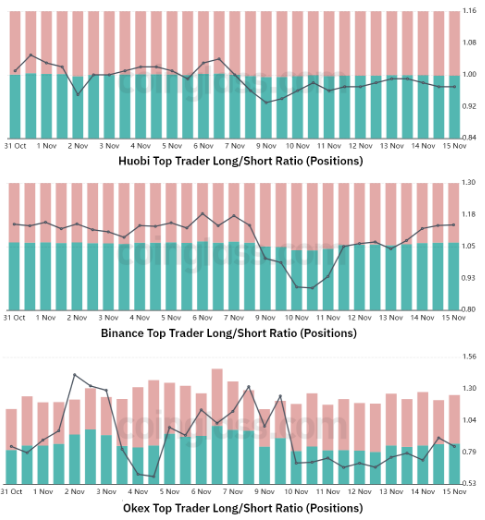 From Nov. 8 to Nov. 15, Huobi’s long-short ratio was 0.98, indicating a balance between leveraged buyers and sellers. Binance traders, on the other hand, initially faced a sharp drop in long demand, but this trend was completely defeated as buying activity prevailed after November 11.

On the OKX exchange, the index has fallen from 1.3 on Nov. 8 to a current 0.81, skewing bearish. Thus, according to long-short indicators, top traders significantly reduced their long positions before November 10 but continued to increase them thereafter.

From the perspective of derivatives analysis, whether it is the futures market or the margin market, there is not much demand for short positions. If the sentiment is primarily panic, things will be even worse for ETH lending and long-short indicators.

Hence, the bulls are in control as traders are unwilling to take short positions when ETH is trading below $1,300.

Days after Ethereum saw its first deflation since transitioning to proof-of-stake, critics began highlighting the removal of the Ethereum staking withdrawal program by the Ethereum foundation on social media.

A crypto community member has shown Ethereum developers, leaders, and KOLs mentioned that ETH staking withdrawals can be opened within 6 months after The Merge. The estimated unlock time is then moved to 6-12 months. Next, the Twitter user highlighted that the timeline was revised to an estimate of 2023 to 2024 before eventually being scrapped entirely.

Another Twitter user fanned the flames, describing ETH staking as non-convertible cryptocurrency investment. He emphasized that users invest according to a timetable and there is no deadline. Others felt the same way and retweeted the original post criticizing the retraction timeline.

Ethereum supporters, on the other hand, have their own responses to the criticism. Anthony Sassano, the co-founder of resource site ETHhub, has defended the network, dismissing criticism that bitcoin maximalists are trying to find another loophole to attack Ethereum, as evidenced by The Merge. It turned out to be wrong. Ethereum developer Antiprosynth also confirms In a tweet, the criticisms come at a time when ETH’s market dominance is increasing and Bitcoin’s is declining.

Meanwhile, the recent FTX mining attack made the attacker the 35th largest ETH holder. The day after the exchange filed for bankruptcy, more than $600 million in cryptocurrency was lost from its wallets. Most of the hacked tokens have been converted to 228,523 ETH, worth about $280 million at the time of writing.

In other news, Ethereum co-founder Vitalik Buterin criticized FTX for doing what he called “compliance virtue signaling,” linking the struggling exchange to Mt. Buterin said Gox and Luna were junior platforms from the start. One type of fraud is more damaging than the other, the Ethereum co-founder emphasized.

ETH Staking Yield Up to 25%

Amid the overall market volatility, ETH staking has brought attractive yields to crypto investors, with yields as low as zero on most fixed-income crypto products. %.

Over the past week, the businesses of centralized crypto lenders such as Genesis and Circle faced the risk of contagion sparked by the FTX exchange. Genesis has stopped withdrawals, while Circle’s yield on customer stablecoin deposits has dropped to 0%.

In contrast, the decentralized finance market is booming. Users simply staking staked ETH (stETH) on the Lido staking service will earn up to 10.7% – an all-time high since the Merge event – and even higher rewards for holders as prices rise. The value of stETH increases.

stETH is a token that represents an equivalent amount of ETH that has been pledged. Staking tokens are long-term locked to provide liquidity for stETH. 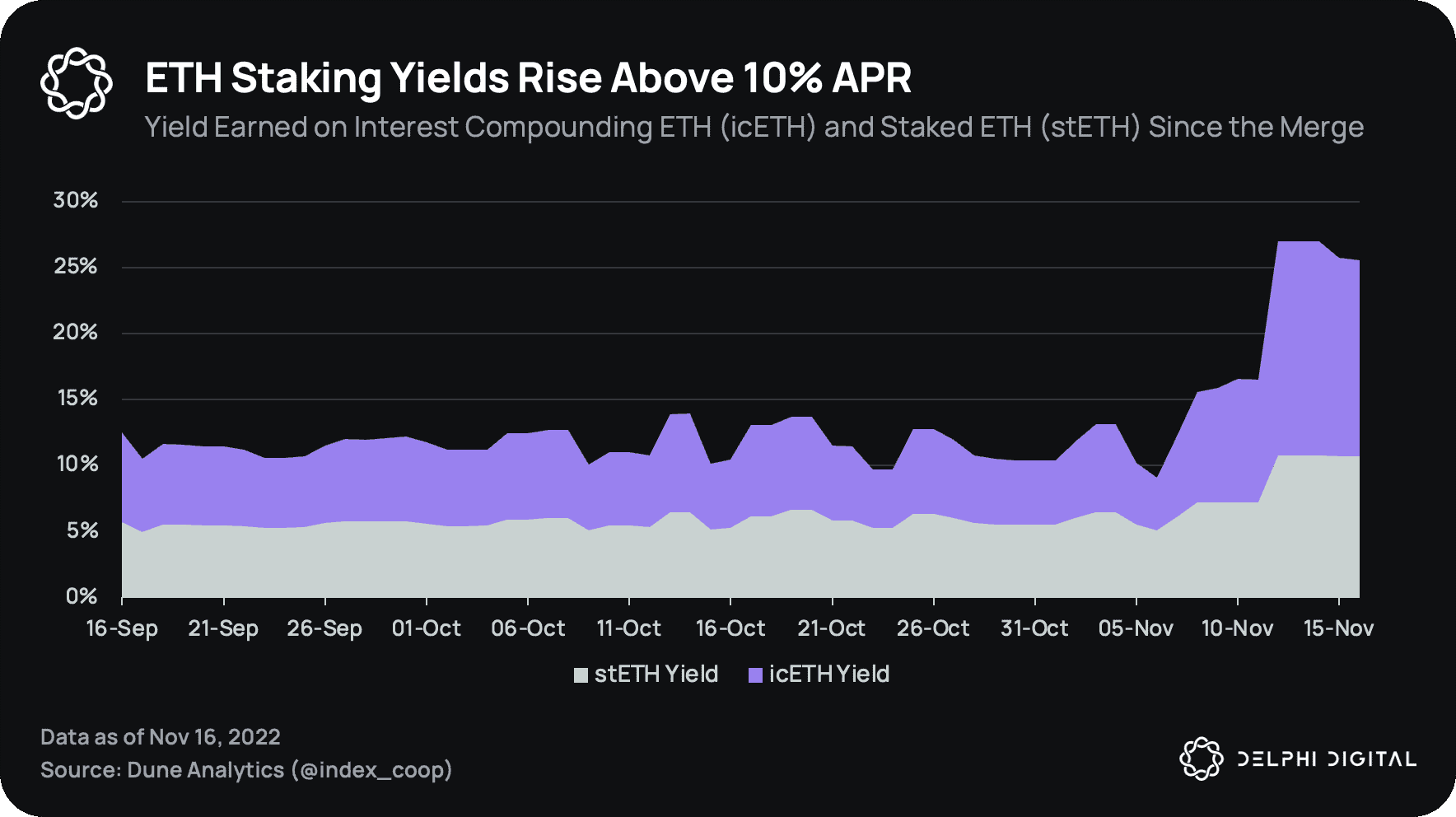 “Recently, the liquid staking protocol also had to increase the oracle’s rebase limit from 10% to 17.5% to increase rewards for stETH holders,” analysts at Delphi Digital said in a note on Friday. Tokens are a cryptocurrency that automatically adjusts its supply to maintain a constant value.

Higher returns kick off a lending strategy with a yield of up to 25.5% on the Compound Interest ETH (icETH) product offered by Index Coop.

Due to increased rewards, recursive lending strategies like icETH have also seen their all-time high of 25.5% since The Merge. At the time of writing this article, it stands at 24.05%.

This effectively leverages the amount of collateral provided to Aave and uses the money to increase returns for traders.

The data program currently has $21 million icETH tokens in the market, of which $12 million is used for Aave to generate additional profits for holders.

These fat gains come with some caveats, however. Delphi analysts said:

“In addition to smart contract risks, icETH investors also need to consider liquidation risks when borrowing ETH from Aave, as well as interest rate risks brought about by the difference between borrowing costs and staking returns.”