DYDX price could double as DEXs take over

dYdX (DYDX) price is trying to break the $2.55 resistance area. If successful, it can be doubled.

DYDX is the governance token of the eponymous decentralized exchange (DEX), offering margin trading and spot trading services. It allows users to contribute to the future of the protocol. Token holders can earn profits through staking, reduce transaction fees, and have the right to propose changes to the protocol.

Despite the collapse of FTX and the sharp drop in the crypto market, the DYDX price rose sharply last week. With all the negativity surrounding other centralized exchanges, DEX-related tokens can thrive as traders look for safer places to keep their assets.

Therefore, there is a good chance that DYDX will see a strong rally, although this will depend on whether there will be another wave of centralized exchange liquidations. This is already visible in the number of addresses on exchanges, which surged (in red) after the FTX failure.

DYDX has been rising with the ascending support line since June 19. It bounced off this line (green symbols) on September 18 and November 19. The second bounce was the catalyst for the current uptrend and formed a bullish engulfing candle. Before this bull market, there was no good news for DYDX.

On November 14, the price was rejected by the $2.55 resistance area but remained just below that area. Combined with the ascending support line, it creates an ascending triangle, which is considered a bullish pattern.

The possibility of a breakout is also supported by the daily RSI as it moves above 50 after trading below that level (red circle).

If a breakout occurs, the nearest resistance will be $5. This number corresponds to a gain of 125% for DYDX. Alternatively, measuring the height of the triangle and connecting the breakout would give a similar goal.

Does a breakthrough happen?

The technical outlook on the weekly chart favors a continuation of the uptrend.

Second, the weekly RSI has formed a bullish divergence and is breaking above the 50 levels.

Finally, the price broke the descending resistance line. It created a bullish candle for the week of November 7-16, confirming the previous resistance line as support.

Therefore, the weekly chart supports the continuation of the upside.

As DOGE and SHIB falter, is this a sign of impending doom?

Since November 1, DOGE price has fallen along with the descending resistance line. At the time, it had just formed a double top while the RSI was showing a bearish divergence.

The decline resulted in a November 9 low of $0.07. DOGE price then rebounded (green symbol), confirming the $0.07 area as support. This is the 0.786 Fibonacci Retracement support and horizontal support area.

Notably, the Nov. 9 low coincided with extremely oversold levels in the six-hour RSI (circled in green).

Currently, Dogecoin price is trading at the descending resistance line. Whether it is a breakthrough or a rejection will likely determine the direction of the future trend. A break from the $0.077 area can take the price down to $0.055, while a breakout will take DOGE above $0.10.

The short-term two-hour chart supports the possibility of a breakout to the downside. Dogecoin price is trading within an ascending parallel channel, which is considered a bearish pattern.

Also, it is rejected by the resistance and midline (red icon) of the channel. Currently, DOGE price is breaking above its support line. Doing so will trigger the aforementioned drop, taking the price down to $0.055. 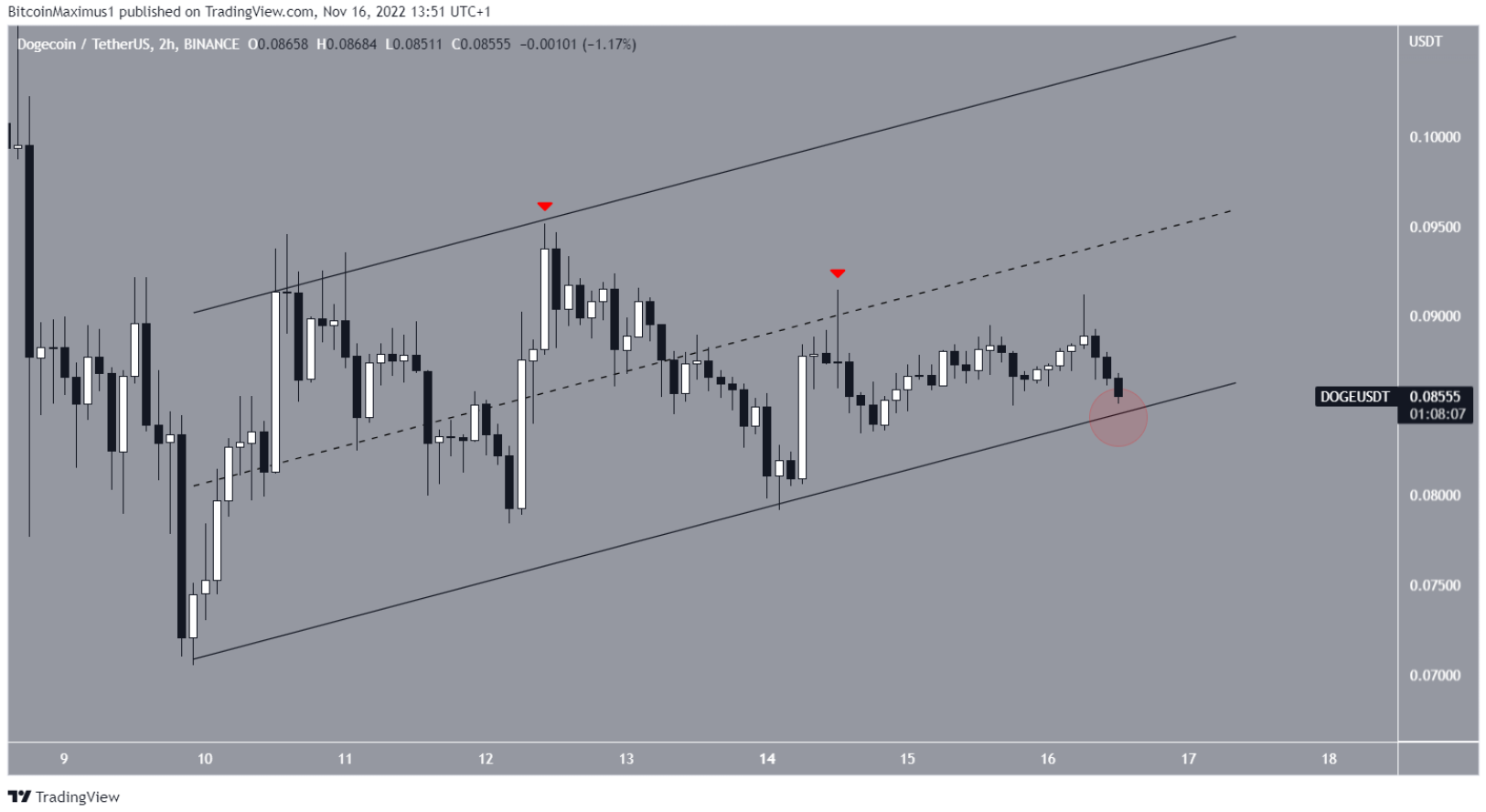 Shiba Inu prices have been falling within a descending parallel channel since August 14th. Prices were rejected by the channel resistance line several times between October 27 and November 9 before starting the current downtrend. When trading inside the channel, it goes as high as $0.000015.

SHIB price dropped to $0.0000082 on Nov. 9, which resulted in a breakdown of both the $0.00000096 support area and the midline of the channel. Therefore, this is an extremely pessimistic development. This area has rejected the Shiba Inu price (red icon) in the past 24 hours.

Therefore, the trend will be considered bearish unless it revisits this area. The next support area is $0.000076. 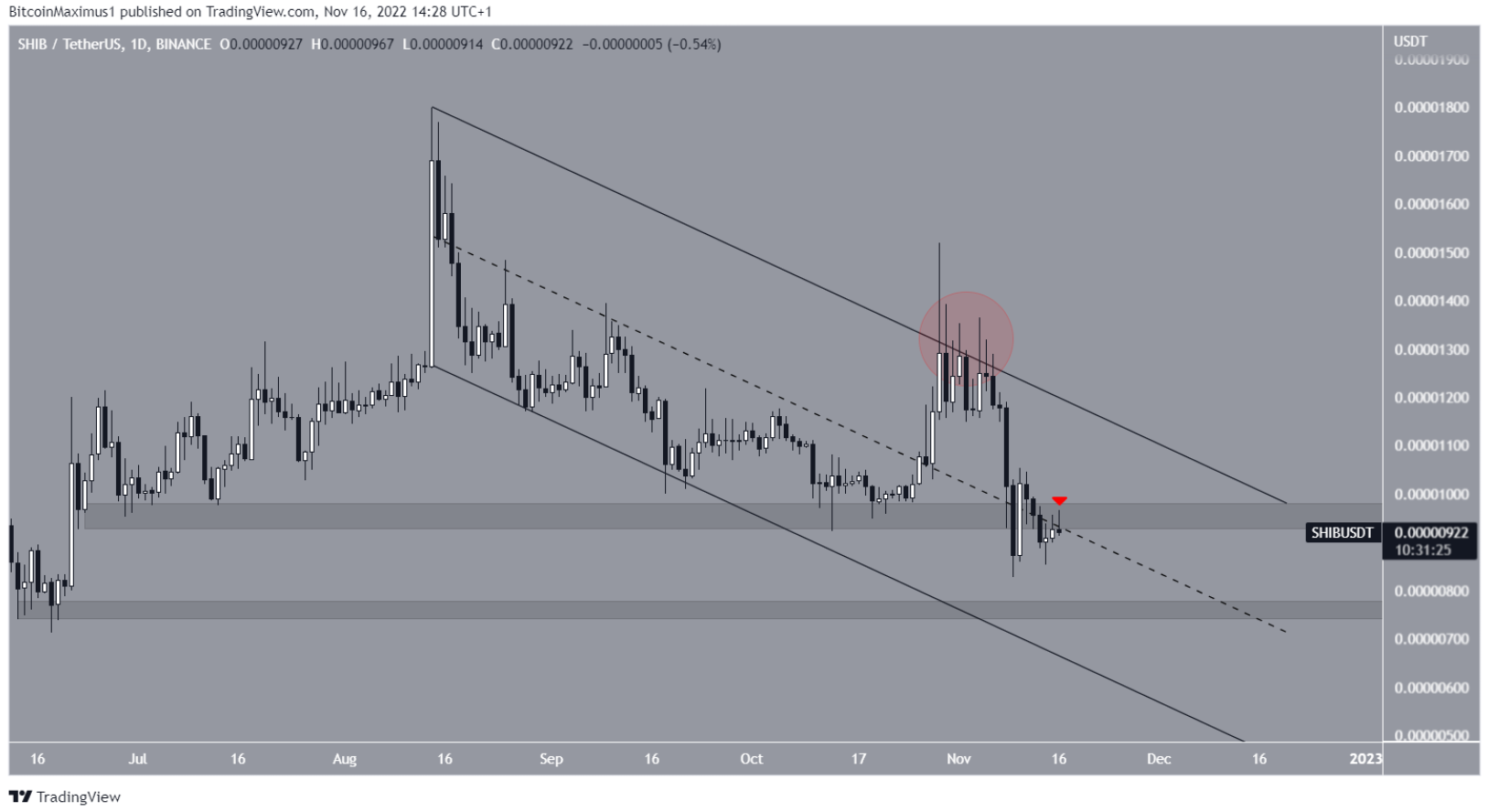 Disclaimer: This article is for informational purposes only and does not constitute investment advice. Investors should do their research carefully before making a decision. We are not responsible for your investment decisions.