Ripples from FTX’s historic crash are still being felt across the industry today, but some segments like DeFi are actually outperforming it.

According to data from Dune analysis trading volume on decentralized exchanges (DEXs) hit a staggering $32 billion over the past seven days.

On November 8, Uniswap’s trading volume more than tripled from the previous day. On the same day, Binance announced that it had signed a non-binding agreement to bail out FTX for an undisclosed amount.

Many exchanges announced that the trading volume for the day had doubled in just a few hours. For example, Curve went from $700 million to $1.3 billion.

Smaller DeFi platforms will also benefit. On Friday, 1Inch Network, an aggregator of various decentralized exchanges, tweeted about bullish developments across all of its protocols in the 24 hours leading up to the announcement. Dune data indicates that the network has seen more than $5.3 billion in transaction volume in the past week.

1/ 📈 In these terrible days, we see more people coming to #DeFi and using #1inch.

In the last 3 days, the number of daily users of our protocols has increased by almost 20%.

“During these terrible times, we see more and more people coming to DeFi and using 1inch. In the past 24 hours (November 11), total direct volume per inch surpassed the $1.94 billion mark. In the past 3 days, our daily protocol users increased by almost 20%.”

The popularity of DEXs over the past week isn’t surprising given the horror stories of the industry’s ongoing liquidity crisis — dubbed “crypto winter” — all of which follow a similar pattern.

Lenders including Hodlnaut, Vauld, Celsius, and Singapore-based exchange Zipmex have all suspended customer cryptocurrency withdrawals due to “recent market conditions,” which is a euphemism for withdrawals. “No liquidity to satisfy outstanding withdrawal requests”.

All of these organizations are now bankrupt.

Freezing withdrawals is ostensibly to “stabilize liquidity”. This phrase has appeared in announcements from several organizations that have frozen client funds, including Celsius.

In the case of FTX, the decision to freeze withdrawal services came after the exchange struggled to meet withdrawal demand of as much as $6 billion in just 72 hours.

Since DEXs do not interact with banks at all, customers must self-custody digital assets for use. Therefore, the customer experience is also a bit more complicated than centralized exchanges.

However, while only being disadvantaged in terms of user-friendliness, they make up for it in security (at least mitigating some of the damage done by FTX). This is because DEX is a self-hosted solution.

In other words, you keep your keys private and unless compromised, your cryptocurrencies cannot be frozen and shut down for routine maintenance work.

If the dire liquidity crisis erupting across the industry is any good, cryptocurrencies appear to be returning to first principles and rethinking the fundamentals of their analysis.

After all, the intervention of centralized entities is why cryptocurrencies were created in the first place.

A week after the FTX and Alameda debacles, there are some very interesting on-chain data points to observe. While record amounts of Bitcoin and ETH are leaving centralized exchanges (CEXs), not all decentralized applications (DApps) and protocols are growing, largely due to reliance on FTX and Alameda.

Some DeFi protocols have positive returns

According to the Token Terminal revenue ranking, 3 protocols have generated more than $1 million in revenue in the past 7 days. Ethereum led the way with a total of over $8.5 million in on-chain gains — an indication of strong fundamentals post-merger.

OpenSea came in second, currently behind Ethereum, with $1.5 million in revenue, while nine other DeFi protocols and platforms earned more than $100,000. 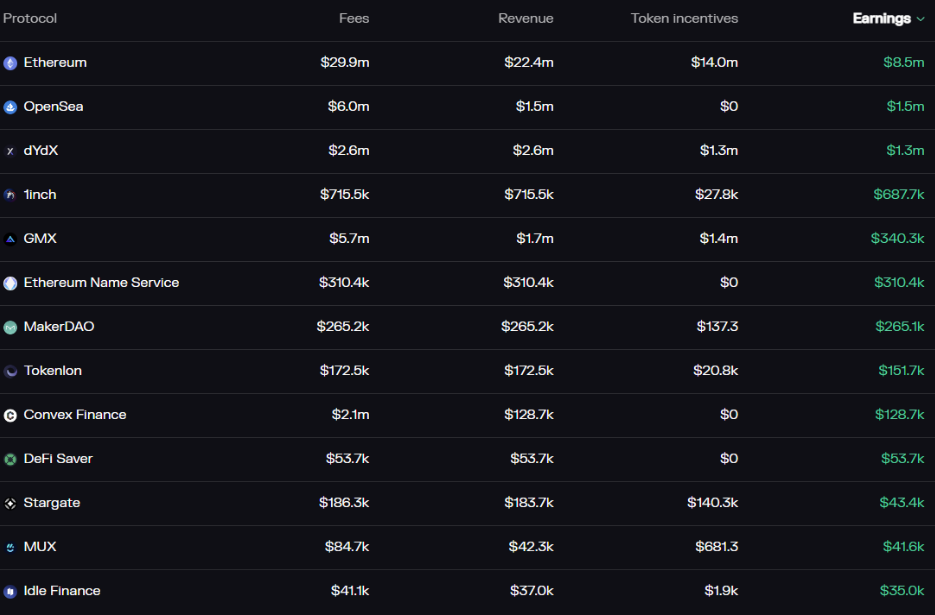 The volatile cryptocurrency market is now seeing an all-time high number of trading users as they tend to move tokens away from CEXs.

According to Token Terminal data, the daily trading volume of perpetual exchanges has reached 5 billion US dollars. This is the highest daily volume since the LUNA and TerraUSD (UST) crisis in May 2022.

The total value locked in DeFi slows down

Only seven protocols saw a net increase in Total Value Locked (TVL) over the seven-day period. Among them, the Gains Network perpetual contract exchange on Polygon has the largest increase, reaching 17.3%.

In contrast, the Ren protocol, which has cross-chain capabilities, saw a 50% drop in TVL last week. According to the report, Ren has a close working relationship with Alameda, receiving funds quarterly and holding funds directly on FTX. The protocol itself benefits from Alameda’s locked liquidity, which increases interoperability. 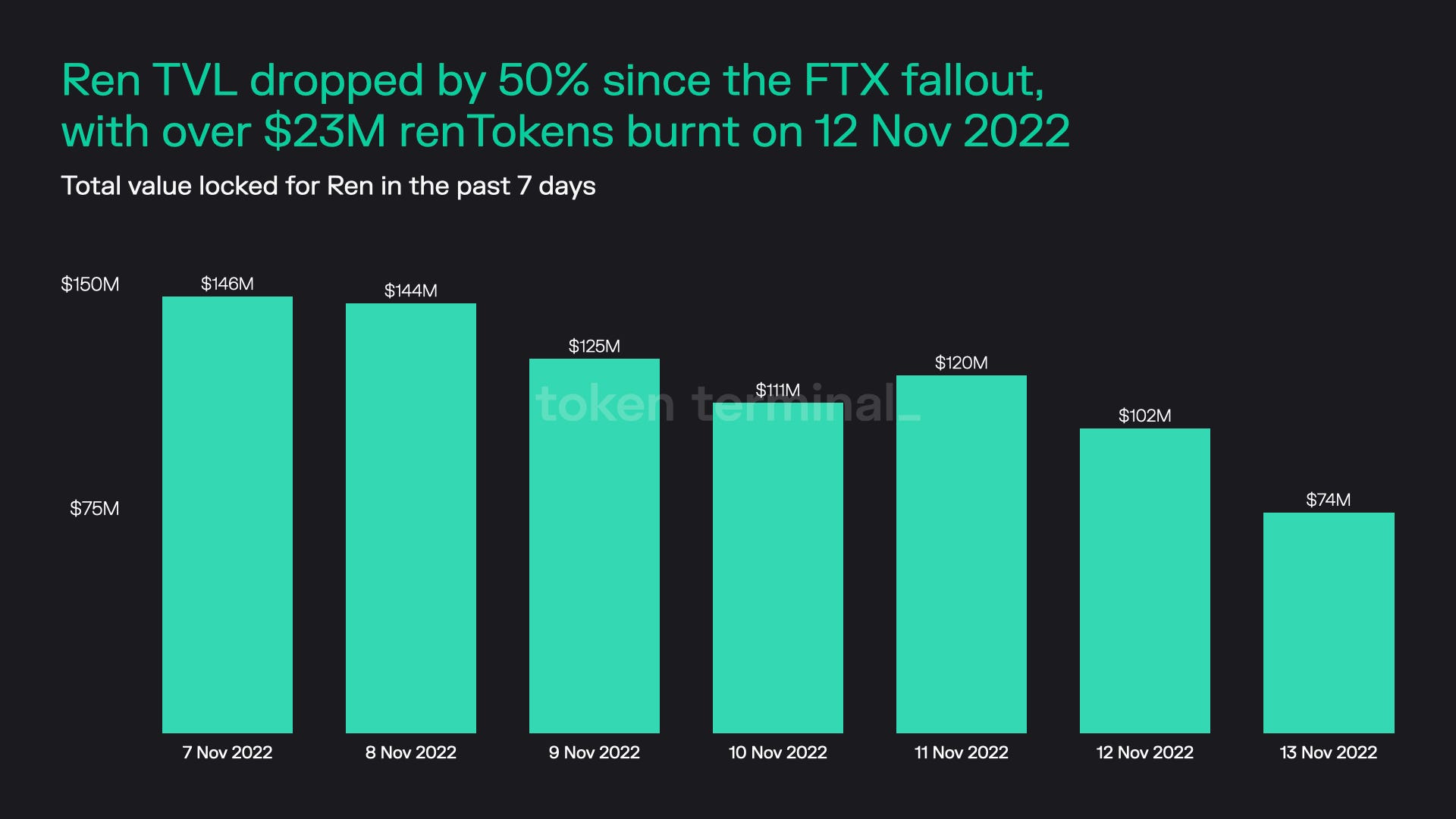 The data also shows that blockchain revenue is growing amid a stable number of daily active users. Revenues on major blockchains are increasing by more than 300% per day compared to previous weeks. 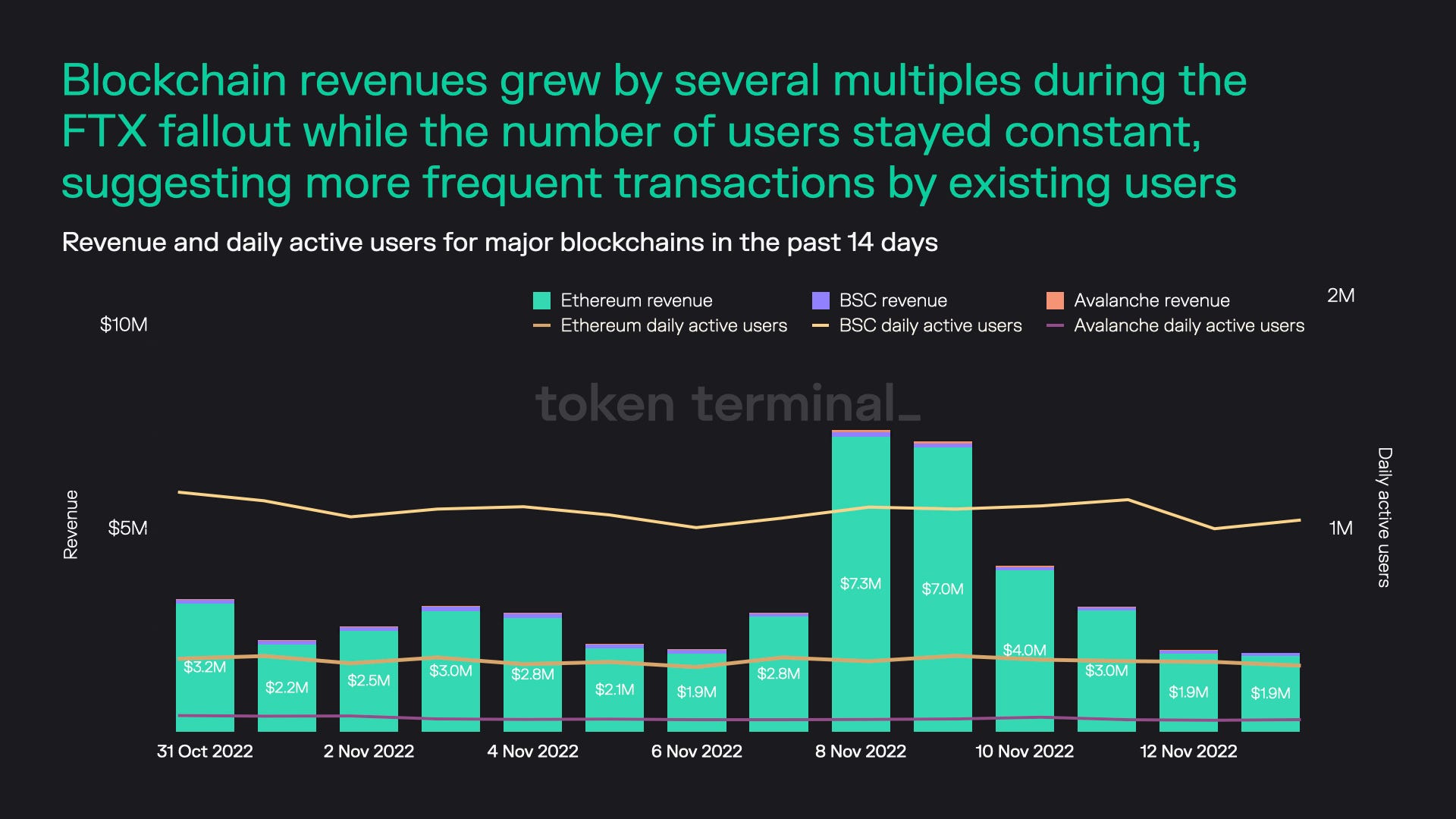 High revenue in Blockchain is not necessarily profitable

As such, on-chain data continues to show some strength with increased activity on decentralized perpetual contract trading platforms and positive revenue from DeFi protocols. Despite historical levels of outflows from centralized exchanges, it is worth noting that the number of daily active DeFi users has not increased and remains stable. The data also shows a slowdown in blockchain gains (except Ethereum) and a reduction in TVL.